Jane on audio is Live! 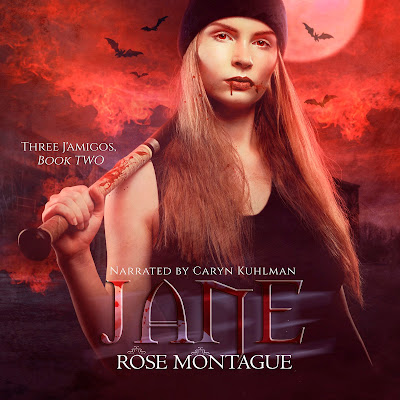 My narrator, Caryn Kuhlman did a fantastic job with this one, blending multiple accents flawlessly. It's a great listen and an affordable price!

Jane & Jade are chasing the Devil around the world. That's probably not the smartest thing to do and when the hunters become the hunted, the action really gets rocking, leading to a non-stop thrill ride of a road trip. Vampires and Shifters, Angels and Demons, throw in a giant troll and some witches and you've got a paranormal war.That doesn't leave much time for romance but there is a wedding, and a funeral, and both are ones you don't want to miss. Take a ride with Jane & Jade!

Posted by Rose Montague at 1:08 AM No comments: 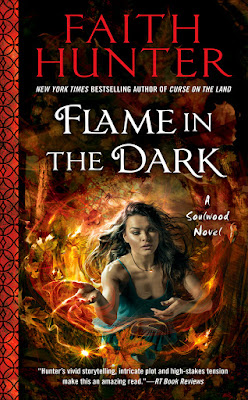 I am very happy to host a blog tour stop for Faith Hunter's latest book,  Flame In The Dark....

About FLAME IN THE DARK:
Nell Ingram has always known she was different. Since she was a child, she’s been able to feel and channel ancient powers from deep within the earth. When she met Jane Yellowrock, her entire life changed, and she was recruited into PsyLED—the Homeland Security division that polices paranormals. But now her newly formed unit is about to take on its toughest case yet.


A powerful senator barely survives an assassination attempt that leaves many others dead—and the house he was visiting burns to the ground. Invisible to security cameras, the assassin literally disappears, and Nell’s team is called in. As they track a killer they know is more—or less—than human, they unravel a web of dark intrigue and malevolent motives that tests them to their limits and beyond.

I looked at Occam and crossed my arms over my chest. Yummy was watching the byplay with the same kind of amusement that a human might display when watching monkeys in a zoo.

Occam looked around. Sighed. “Right. Okay. I see.” He handed me a camera. “Try anyway.”

I threw the blanket back at him and sat on the cement edge of a planter. Placed the camera on the ground prominently in front of me as if it had a purpose. I dug my fingers through six inches of mulch and stuck them into the soil. It was good- quality potting soil mixed with top soil. There was a nice concentration of nutrients. One spot where some stupid human had dumped in a cup of coffee. I boosted the tree, just in case the winter was long and cold, and withdrew my hand. “Nothing. But why do they think the shooter stood here? The rounds probably popped off the roof.” I looked up. So did Occam and Yummy, who pursed her mouth.

She laced her fingers together, bent her knees, and said, “Come on, cat. I’ll boost you up and you can pull me up. Maggot can wait down here.”

I spotted Rick in a group of suited men and women, mostly Secret Service and Ffeds. “I’ll be eavesdropping over there.” Occam didn’t acknowledge my comment. Without looking, he took a running start and bounded into Yummy’s hand. The vampire tossed him up and forward and he touched down on the roof with cat grace. In his cat form that leap would have been easy all on his own.

Yummy backed up and raced in, leaping onto the planter and pushing off with one foot. Occam reached out over the edge and grabbed her arm, pulling her up. They collided, fell out of sight, and hit the roof.

I love Faith Hunter's Jane Yellowrock books and I am becoming a huge fan of this series as well. Nell Ingram kicks butt in a different way than Jane does but it is no less powerful and in the end I think it is safe to say you don't want to mess with Nell Ingram. Fans of this series will be pleased to hear that several of the more troublesome problems Nell is dealing with are resolved while the romance angle continues to develop. Like the Jane Yellowrock books, I have found the rich character development to be a huge plus. Team and family continue to grow in this one and the powerful and stunning conclusion will leave you breathless. The element of mystery is strong and I didn't anticipate the revealing of that mystery at all. I give Flame In The Dark 5 stars.

The release date is December 5th but you can pre-order a copy on Amazon at the following link...
Pre-order on Amazon


GIVEAWAY!
The tour giveaway is for 3 sets of the 1st 2 Soulwood books ( BLOOD OF THE EARTH and CURSE ON THE LAND ) and one $50 Amazon gift card (US residents only)! 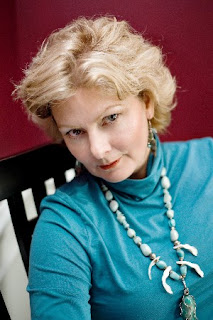 New York Times and USAToday bestselling fantasy author Faith Hunter was born in Louisiana and raised all over the south. Altogether she has 40+ books in print under the names Gary Hunter, Gwen Hunter, and Faith Hunter. As Faith, she writes two contemporary Urban Fantasy series: the Jane Yellowrock series, featuring a Cherokee skinwalker who hunts rogue vampires, and the Soulwood series, featuring earth magic user Nell Ingram. Her Rogue Mage novels are a dark, post-apocalyptic, fantasy series featuring Thorn St. Croix, a stone mage. The role playing game based on the series, is ROGUE MAGE, RPG.