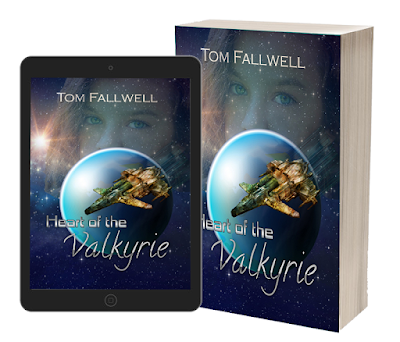 Today on Fantasy Fun Reads, I'm pleased to be featuring Tom Fallwell, author of Heart of the Valkyrie.

Blurb for Heart of the Valkyrie
In a future among the stars, the origins of mankind have all but faded into the past. Nathan and his crew aboard the Valkyrie, an extraordinary but ancient ship, enjoy the freedom of the outer systems, away from the despotic rule of the Quanios Empire. But when they suddenly find themselves saddled with an equally extraordinary teenage girl, Sybille, who is now being sought by the Empire, things take a very unexpected turn. They are thrown into a desperate race to locate the lost planet of mankind's origin.


To stop the Empire, they must solve the mystery of Sybille's past and locate Earth first, or it could mean the end of freedom for the known galaxy.

Excerpt from Heart of the Valkyrie
Nathan stepped out of the bathhouse onto the hanging walkway in the upper sections of the Wandering Star Café. Located on the outer edges of Tranquility, the Wandering Star was a favored spot for crews like his—salvagers, traders, and smugglers—and he expected to find the rest of his crew already spending their share of gold bars on drink and other extravagances.


Having finished his bath and shave, he’d changed into some clean clothes and made his way down to join the others. No sooner had he stepped off the lift he heard the slurred voice of Simon cry out, “Hey, Captain! Over here!”
His eyes swept over the crowd, finally spotting his crew at a table in the back. The music was loud, half the customers well-inebriated, and a fight already in progress on one side of the large metal building. A typical evening for the Wandering Star.

The place was built from the salvaged hulks of old ships, the doorways made from old access hatches, with a high ceiling of gridwork and metal spans. Rusty stains decorated the metallic floor, the result of many spilled drinks and retched stomachs.

The entire crew of the Valkyrie sat at a long table. On one side were his First Mate, Yiesa, navigator Grayson, and the ship’s doctor, Ania. On the right were his engineer, Simon, his weapons specialist, Eamas, and the explosives expert, Jeffery Valkoris, who’d already passed out. His head lay on the table as he snored, drool dripping from the corner of his mouth and pooling beneath his face.

“Jeff still can’t hold it, can he?” Nathan asked rhetorically as he sat down next to Yiesa.

“His problem is he just drinks too fast,” commented Eamas with a deep laugh.
Yiesa had a bottle of a locally brewed beer that the people of the outer systems called Full Burn in one hand. She nodded agreement. “He didn’t last more than an hour, as usual.”

Nathan raised a hand to get the attention of the waitress a few tables away, holding up one finger. She nodded, knowing he was ordering a bottle of Full Burn. He then turned back to the crew. “Go easy, guys. Despite all that titanium, it didn’t get us near what I expected.”

“Maybe we should go back and get another load, Captain,” grumbled Eamas. “The share we got for this run won’t last long. There’s still plenty of titanium in that wreck.”
Eamas’ fierce attitude was as daunting as his appearance: a frame that stood over six-feet-five, large corded arms and legs, a bald head and skin as smooth and dark as onyx. His deep-set eyes could halt a charging beast, accompanied by a scowl that would cause the bravest of men to tremble. Yet within that intimidating frame dwelt an equally compassionate heart. Nathan was the only person he took any guff from, even though he and Jeff shared a mutual respect. In fact, they were kindred spirits, both infatuated with things that go boom.
Jeff, his face generally shadowed with stubble, his brown hair short and flat, was less impressive than Eamas, but no less aggressive. He thoroughly enjoyed blowing things up, which made him a natural for explosives. He and Eamas were usually the ones getting into the thick of things and doing the dirty work. Both were proficient warriors and knew their weapons.

Nathan peered at Eamas thoughtfully about his suggestion, then shook his head. “Too dangerous. Word is, the Empire’s been seen around the outer systems a lot more than usual. Likely as not, they’ve already located the wreck.” After being handed his bottle from the waitress, Nathan took a long swig of Full Burn. “Unless you've got a mind to take on the Empire.”

Eamas stared back, his brows furrowed, and his brown eyes determined, but he capitulated. “I know we can’t do that. Not with the Valkyrie in her current condition. I just wish we could fit some proper weapons on the old girl.”

“I’ve been saying that,” chimed in Simon. “If we could get her properly fitted, I know I could initiate more of her biologically enhanced systems.”

Yiesa glanced around the crowded café, but no one seemed to be listening to them. “Keep your voice down. If anyone knew what the Valkyrie is, we’d be hard pressed to keep her.”

“She’s right guys. Let’s not discuss this here,” Nathan whispered.
“So, what’s this talk about the Empire?” asked Ania, changing the subject.

Nathan cast a glance at her. Long brown hair, brown eyes, and a button nose framed a mousy face, which made her appear considerably younger than she actually was. It also camouflaged her unparalleled medical skills; a wizard with medicines and combat surgery. She was no stranger to space travel, either.
“Just something Victor said,” Nathan replied. “He said they’re up to something. Rumors floating around about another expansion campaign. Maybe even another Ascension War. But that’s just talk, as far as we know.”

“As far as we know,” commented Eamas. “Those sons of misfired thrusters are always sticking their noses where they’re not wanted. Preadolescent turfers, the lot of them.”

Yiesa chuckled. “True, but they have guns.”

“Maybe, but we know how to use them.”

“It doesn’t matter,” said Nathan. “Regardless, there’s no way we can take on the Empire. With the Valkyrie in the shape she’s in, we couldn’t even stand against a small scout, let alone a patrol squad.”

Nathan finished off his bottle and raised the empty to order another. “Enjoy the evening, guys. Tomorrow, we need to find another job.” 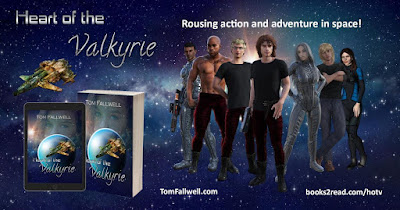 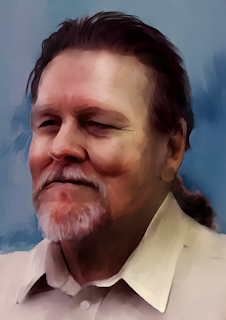 Two things, a runaway imagination and an encouraging friend. I’d always had ideas for stories in my head, and had attempted on occasion to write them down, but I just never really had the time or the skill (I thought) to write a book. But after retiring from my career as a software developer, I found I had tons of free time on my hands. I had been speaking to a friend, Jeri, about my story ideas, and she said I should write them. Due to her encouragement, I started writing. My first story was short, but she liked it, and so did others that read it. So, I decided that maybe I could do it after all and began my first novel.

What do you know now that you wished you knew when you first started to write?

I had no idea what I was doing at the start, so there are literally tons of things I’ve learned over the past five years that it would have been wonderful to know when I started. Perhaps the most important thing I learned was that self-publishing is a lot more work and cost than I first expected.

As I’d said, I started with a short story, which I didn’t publish at first. Next, I wrote a novel, and I considered sending the manuscript to a publishing agent, but after researching the chances of being accepted I decided to self-publish. From there I went on to write a fantasy trilogy, then went back and re-wrote my first book and published again under a different title. By now, I was feeling much more confident about my ability to write. Since I began in 2014, I’ve published six novels and an anthology.
Two main reasons for my decision to self-publish were: the amount of time involved in pursuing the traditional publishing route, and I liked the idea of having complete control of my creations. I love controlling the pricing and distribution of my works.

Who are your favorite authors today? What genres do you love to read?

My favorite traditional authors are pretty much that same as they’ve always been. Mainly, J.R.R. Tolkien, Robert Heinlein, Isaac Asimov, Frank Herbert, Ann McCaffery, Robert E. Howard, and Roger Zelazny, to name a few. I haven’t read a lot of the traditionally published contemporary authors. As far as Indie Authors, like myself, I have really enjoyed the works of Aaron-Michael Hall, Patrick Hodges, Michael R. Stern, and A.J. Leigh, also to name only a few. There is more to read and I’m sure I can increase both lists above in time.

As you can see from the authors above, I’m quite partial to fantasy and science-fiction. However, I have enjoyed books in other genres as well. Mostly, thrillers and mystery, like Stephen King or Agatha Christie

Having just released my first science-fiction novel, Heart of the Valkyrie, I’m in the process of deciding which project to do next. I have several ideas for books, and want to write them all eventually, but I’m leaning towards a fantasy tale about pirates.

I have ideas for more fantasy and science-fiction stories, science-fantasy tales, and even a modern-day mystery tale with a bit of the paranormal in it. Time will tell, as I haven’t decided just yet. Regardless, you can rest assured I will continue writing, as long as I can.