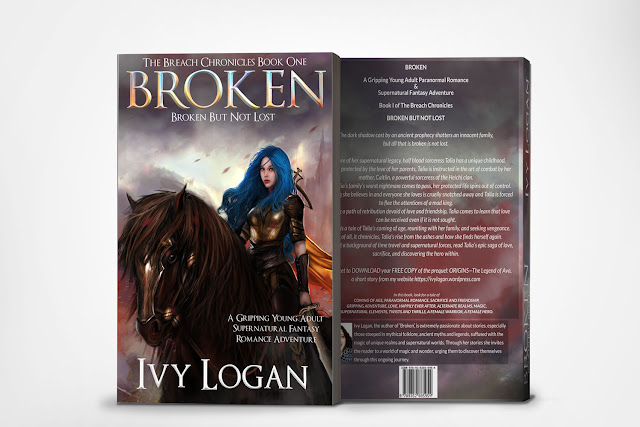 It's my pleasure to team up with my friend and fellow Indie Author, Ivy Logan on this. I hope you enjoy!

WHAT HAPPENS WHEN JEWEL FROM THE NORMA JEAN'S SCHOOL OF WITCHERY AND TALIA, FROM BROKEN MEET?

A witch and a sorceress from different timelines meeting for a brief moment in time, do they have anything in common? What do they talk about?
Read on to find out.

Talia is on the run. It’s been a few months since she fled Aberevon. King Damien’s men are chasing her. With her gorgeous looks and cerulean blue hair hiding out is a challenge. She barely sleeps and has to be on her guard because she has no one else to depend on. No friend or family. She is alone.
This is when she meets Jewel.
Jewel is from the future. She accidentally stepped through a gateway in the Veil, the invisible barrier between worlds and timelines and reached the time to which Talia belongs.
Talia has been on the run but her family was in hiding even before she was cast adrift. She just never realized it. The warmth and love of her parents and brother compensated for the lack of friends. Yet, meeting Jewel is special. It doesn’t matter to Talia that Jewel is from another time. This is the first young person, her own age she can actually relate to. For Talia, Jewel is like a much needed breath of fresh air. Will Jewel make a difference to Talia’s sagging spirits?

Jewel : Why are you so worried? I am the one who has stepped into the past, and I’m not sure how I will return to my own time.

Talia : You have a problem Jewel and every reason to worry. I hope I am able to help you get back. I know how important home and family are. I have a reason to worry too. I bet you would feel the same if you were in my shoes. A mad and wicked king wants to marry me because he thinks I am an enchantress.

Jewel : So are you one? An enchantress, I mean?

Jewel : What do you mean? Either you are or you aren’t. So which one is it?

Talia : I just learned about my roots and my legacy a few months ago. My mother, Caitlin was a sorceress but she never used magic in front of me. I grew up believing that I was an ordinary human child. I didn’t know I was a half-blood. She…she died before she could teach me any magic. During my childhood years my powers made an appearance only when I was very angry or extremely upset. But I couldn’t control them then and even today the situation is much the same. What is the use of magic if you can’t use it when you need it?

Jewel starts laughing. Talia stares at her in amazement and with a hurt look on her face.

Talia : I thought you were my friend. I’ve never had a friend before. But you are laughing at me.

Jewel : Don’t feel bad Talia. The reason I laughed was because I am also almost in the same boat as you. But I am a witch, a bit like an enchantress. In our time we have a school to hone our witchcraft skills, though. I go to the ‘Norma Jean's School of Witchery’. Despite that… Here is another reason for my laughter and your turn to promise not to laugh. We have a common problem. You say you have no control over your powers but at least you know that they are there. I can’t get even the most basic spells to work. Only Thor is able to help me.

Talia : Who is Thor? Your brother or father? Oh, Never mind! I get what you mean. You laughed, not at me but at the irony of the situation. Thank you for telling me the truth. I feel better now. I was so miserable before you got here. I didn’t think it could get worse. But it can. I can’t believe that I found a friend, someone like me and she has similar concerns. I don’t feel alone for the first time in a long time. How do you deal with the loneliness? Maybe I can get some ideas from you.

Jewel : I don’t have to because I am not alone. I have friends at school and they are always there for me. In fact I have to return home soon because a powerful magical device has been stolen and I have been recruited by a secret government agency made up of witches with special abilities to recover it. My friends always have my back.

Talia : Jewel you are so lucky. Lucky to have friends I mean. I had no one but my family and now they are all gone. I hope I find someone nice to trust someday. I like you but you will be going soon and I will be alone again. I hope you are not in any danger. I didn’t exactly understand everything you said but the work you are doing sounds dangerous.

Jewel : It is, but there is nothing I would rather do. I do like playing ‘Witch Pong’ for fun. What did you do in your free time?

Talia : Ah, well! I used to train a lot with my mother. She taught me to fight with swords and spears and also how to use the bow and arrow. Ah let me see.. Yes, I also often, disguised myself and hide in plain sight and my parents would try and spot me. I called this game ‘Hide-N-Seek’.

Jewel : That sounds a lot like witch school. They only thing is your mother was your teacher. I didn’t ask about your training. I asked you what you used to do for fun, before your life on the run.

Talia : I used to ride horses. I loved horses. We had our own stables and I had my own pony called ‘Liata’. Now I don’t know if I will ever have a horse of my own again. And yes one more thing, I used to play a lot with my younger brother, Joshua. But what is this witch tong?

Jewel : Witch Pong not Tong. It’s a game we witches play with magic balls and broomsticks. It is a whole lot of fun. I hope I get a chance to teach you some day.

At that moment an iridescent light falls on Jewel, she starts to fade. The air around her starts whooshing.

Talia : I think you are being pulled back into your own time, Jewel. I must say good-bye. It has been such a pleasure to meet you. I was feeling down and out, lonely and out of sorts but meeting you has shown me that everyone has problems. We have to find a way to deal with them, our own way. Thank you so much and good- bye, don’t forget, you have to teach me to play pong, someday. Farewell!

Jewel : Bye Talia. Be safe. Don’t lose hope and don’t let that king catch you. Until we meet again….. 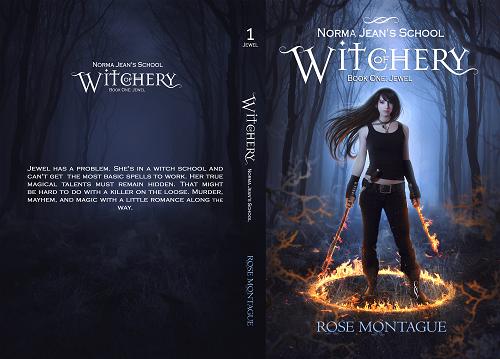 ‘Broken’ is Book One in The Breach Chronicles series by Ivy Logan. It is the tale of a young sorceress bereft of her powers but determined to avenge her family. For that she must rise from the ashes of destruction. Even though she thinks her heart is resistant, she can’t hide from love. Love find her and she find the courage to stand tall because all that is Broken Is Not Lost. Broken currently available for pre order releases on 1/12/17.

Posted by Rose Montague at 4:57 AM No comments:

Nobody Said It Would Be Easy 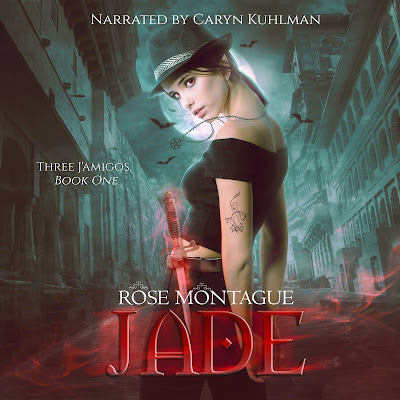 That's not quite true, of course. I once said that writing a book was the easy part. That was when the words were flowing and I couldn't stop writing. Now, the writing part is the hard part for me. I recently set my work in progress (Wiznewski James) to the side because I was having a hard time writing. I'm now working on The Dragon Egg: A Jewel Adventure. Maybe the change will help. Hang in there with me.

I see a lot of advertisements that make promises of best seller status. Usually these are written by best selling authors. I just wonder if I wrote a book on how to write a best seller, would it become a best seller? I don't think there are any easy buttons for this. I also believe each author has their own path to success. What works for one doesn't always work for others.

So after you write that book there is the editing, publishing, marketing, and promoting of the book. I try to have fun with it but there are many potholes in the road. When I first became an author I couldn't believe how hard it was to sell a few books. I had a few reviews I found hard to swallow. I discovered I had missed some typos. Recently I found my audio book plastered all over YouTube and that really hit me hard. It's so discouraging to see your work pirated like that. Especially when you are trying so hard just to sell a few books.

In any case, I will do my best to get past this and keep plugging along with my writing and promoting.

If you want to pay for my audio book so both the narrator and myself will make a few hard earned dollars in royalties, it's priced very reasonably on several platforms.

Posted by Rose Montague at 11:36 PM No comments:

Back in March of this year, I made the decision to go wide with the distribution of my eBooks by using Pronoun, a publishing platform that would expand my distribution from just Amazon to places like Kobo, B&N, iTunes, & Google Play.

They were great to work with, had excellent response time when I had a question, and I was pleased to see some sales and royalties from these other distribution channels. That didn't last long as recently Pronoun announced it was shutting down. So it goes.

My eBooks are now exclusive to Amazon and if you are into the Kindle Unlimited thing, all my titles are now available through that program.