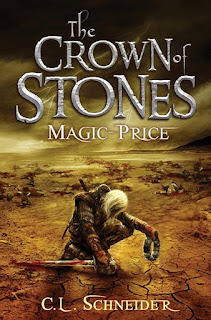 This week I am pleased to interview Epic Fantasy author C.L. Schneider.  Magic Price is the first book in her trilogy, The Crown of Stones.

Blurb:  For ten years Ian Troy has been running from the blood in his veins and on his hands.
Born of the Shinree, a fallen race reviled for their inherent addiction to magic, Ian is no stranger to scorn. His people, drugged to suppress their magic, are bred and sold as slaves. Some are granted conditional freedom, but only to serve the ruling races. Possessing the magic of a soldier, Ian was conscripted into the Rellan army at a young age and made to fight in their longstanding war against the brutal Langorians invaders.As the years dragged on and the death toll climbed, he tried to believe as his Queen did, that they could win without magic. She was wrong. Defeat was imminent.
Pushed to the brink, Ian defied orders and turned to The Crown of Stones, an ancient Shinree relic of untold power. Ignorant of the crown’s true purpose, he harnessed its magic and brought peace to the realms—but at an unthinkable price.
A decade later, Ian is still haunted by that tragic day. Having turned his back on soldiery and magic, he lives in self-imposed exile. He drowns his addiction with guiltand his guilt with wine.He struggles to leave it all behind.
But the past is catching up.

1. I got my love of reading from my mother who also had a large selection of books around the house. When did you realize you were hooked and what book(s) did that for you?

With my parent’s diverse ‘library’ at my disposal, I was an early reader. By late into middle school I had dipped into nearly every genre. I adored mysteries, especially gothic. But what I was drawn to that age were the classics. My parents had a beautiful set. They were leather bound with gold on the edges of the pages, and silk ribbon bookmarks. I remember loving those books; the feel, the smell. The look of them lined up on the shelf. Gone With the Wind, Jane Eyre, A Tale of Two Cities, Anna Karenina. There were more. I don’t believe I read the entire set. But those were the books that cemented my love of reading.

Since childhood I’ve had fascination for all things medieval, mystical, and supernatural. I started going to the Renaissance Fair when I was 8 or 9, I think—in costume, of course. I was the only girl in school who would actually admit to being crazy about sci-fi. In high school, the story of King Arthur captivated me. I read every incarnation I could get my hands on for a while.But it was at age 18 when my brother gave me a copy ofThe Mists of Avalon that I was truly drawn toepic fantasy. It struck such a chord with me. I read it twice in a matter of months.  That was the book that made me want to write fantasy over other genres.
Epic fantasy is generally described as a novel set in an entirely imaginary world, completely unlike our own, with environments and societies that are fully explored and realized. As a rule, the story is lengthy and evolves over multiple books. It often includes a large cast of characters and sweeping battles or a journey across multiple realms. The plot is complex and game-changing, leaving the story-world altered on a grand scale and the characters evolved.

3. How is the third book in your series coming along?

Right now, I’m nearing the end of my first revision of the 3rd book in The Crown of Stones trilogy. It’s very bittersweet, wrapping up this series. It’s been a long journey. I’ve lived with these characters for so long. Yet, at the same time, I’m looking forward to something new.
I’ve already received some feedback on the first half of book 3, which is always exciting. I’ve also recently been in touch with my cover artist and communicated exactly what I’m looking for. He blew me away with the covers of the first two, so I can’t wait to see what he comes up with next.

4. Tell us about your initial publishing experience. Did you try to find an agent or publisher, or did you have it in your mind all along to do it by yourself?

It was always my intention to go the traditional route. I’d carried a dream with my since I was 16 of walking into a bookstore and seeing my book on the shelf. So when I finished Magic-Price, I did my research, sent out my query letters, and held my breath. Over the next year and a half I had some interest. I had agents who asked for outlines. Some wanted a short synopsis, some wanted long. Some wanted to read the first 10 pages. Some rejected it outright. It was an exciting time. One man, who was the agent for fantasy at the time, actually sent me a personal response. He said he was intrigued by my query. I stunned. There might have been dancing.
Ultimately, he passed on the manuscript. While he liked my story, he felt “the writing wasn’t quite up to the level he needed for today’s competitive market.” I was disappointed, but I agreed with him. Deep down, I knew it wasn’t ready. I knew I could do better. So I purchased stacks of books on the craft of writing and dove in. I read them all, cover to cover. Then I started revising. I cut thousands of words. I rewrote the entire beginning, improved my characters, and tightened the plot.
The whole time I was reworking the manuscript, my good friend Dawn was pushing me to self-publish. Ebooks had exploded onto the scene. Fantasy was moving into the mainstream. She loved my story andthought I was crazy for waiting on an agent or publisher. Her reasoning was, if I published Magic-Price as an ebook, and it did well, I might attract the attention of a traditional publisher. I couldn’t argue her reasoning, but I wasn’t ready to give up. My dream was to hold my book and see it on a shelf. Not a Kindle.
Finally, one afternoon, I decided to humor her. I pulled out the laptop and headed to Amazon, fully expecting to tell her once again that I wasn’t interested. That’s when I foundCreateSpace. I immediately recognized their print-on-demand self-publishing services and Kindle conversion as the best of both worlds. Not only could I fulfill my dream of a physical book, I could have an ebook, and sell both on Amazon. I created my account that day and never looked back.
Self-publishing was one of the best decision I’ve ever made. It has been an amazing experience for me I have control over my work. I’ve learned so much, and met some amazing people. Readers all over the world have read my words. And I have two beautiful books on my shelf.

5. What do you know now, having published two books, that you wish you knew when you first started?

There are multiple answers to this question. I feel like I’ve learned things with each book, and I don’t expect that to stop anytime soon! One thing that stands out at this moment, though, is the rewards of getting an early start with social media.
I knew I would need to establish an online presence. I knew I would need to market/promote. But I gave no thought to doing so more than a couple of months ahead of time. I also had no idea the tremendous personal benefit I would gain simply from connecting—or how much I would enjoy it.I’d always believedother authors would be the competition, and would treat me as such. That I would feel like a tiny, insignificant row boat drifting oarlessin avast ocean full of yachts. I couldn’t have been more wrong.
Once I left my uninformed, lonely little comfort zone, Idiscovered a community that is generous, helpful, full of encouragement, and incredibly supportive. Icouldn’t imagine now going without the regular sharing of knowledge and ideas, the jokes and tips. The tweets/posts/etc., and the people who write them, have become a part of my writing experience. Some have become my friends.
It would have been a huge help to have formed such connections earlier,while I was still working on my manuscript.On the good writing days, I believe it would have encouraged me to finish faster. On the bad ones, I could have used some of those tips and jokes.
It is a vast ocean, but one thing I’ve learned: it’s no fun sitting in the boat alone.

6. For those that are reading this now, what can you tell them about your series that might convince them to give it a try?

The Crown of Stones is an epic fantasy, but I believe it appeals to a broader audience than just the rabid fantasy fans. The story is fast-paced and character driven, and geared toward mature readers (not YA). In telling itfrom the first person POV of our flawed, tortured anti-hero, Ian Troy, my goal is to drag you into the book and make you feel it. I don’t want you to read about Ian. I want you to be Ian. I want readers to discover all the good and the bad his world has to offer right along with him. And in a land that’s been plagued by war and slavery for hundreds of years, there’s a lot of bad.
I’ve also taken an abnormal approach to magic using, making itnot a revered power, but acrippling and deadly addiction. Ian’s entire race is born with this addiction and he enjoys the pleasures that come with casting, as acutely as he feels the pain of his cravings and his guilt.
I’ve had quite a few readers and reviewers admit they don’t normally read fantasy. Having expected long drawn out meanderings and hundreds of pages of backstory and world building, they were pleasantly surprised how much they enjoyed the story—and how quickly they were turning the pages.
I know the Crown of Stones is not for everyone, but I’m grateful for those that give it a try. Afterward, come find me. I’d love to know what you thought of it.


Bio:  Born in a small Kansas town on the Missouri river,I grew up in a house of avid readers and overflowing bookshelves. When I was sixteen I wrote my first, full-length novel on a typewriter in my parent's living room. My main focus is adult epic fantasy, but I also write urban fantasy, and the occasional science fiction or post-apocalyptic story.
I am proud to be a self-published author and a member of the #indiebooksbeseen community. My goal as a writer is to stir emotion and make the reader feel, whether it be good or bad. I believe in writing fearless, and that telling a story as it is meant to be told, is far more important than word count.
The Crown of Stones: Magic-Price is my first published novel. The second book in the trilogy, Magic-Scars, was released earlier this year.

You can follow C.L. Schneider at the following Links:

Posted by Rose Montague at 4:18 AM