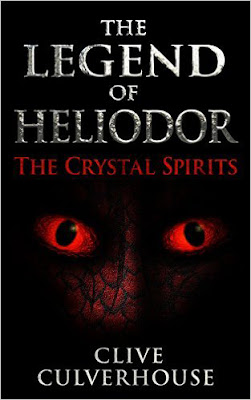 Imagine growing up with an ancient sacred legend only to find out you're in it; your life would never be the same again. Who would you trust with your secret? That's what happened to Kyan as he was born into a world of powerful crystals and frightening Fire-Tongue dragons. Now he must decide who to trust. The Legend of Heliodor is known throughout the land; taught and embellished by the mysterious and scary Professor Cinnabar. A scruffy, young boy called Kyan finds himself thrown into the magical story and becomes the legend itself as a dangerous quest falls upon him to bravely battle evil and try to re-unite two crystal spirits parted by a powerful King a thousand years ago. The crystal spirits must come together again or the once wealthy realm faces a violent destruction from the crystal spirit and the Fire-Tongues. It is widely known, from ancient times to today, that crystals have special powers about them whether for healing, guidance or protection, but now those powers are taken to the next level in this amazingly enchanting tale where gemstones, magic and alchemy come to life in spectacular fashion. Colourfully glistening, exciting and magical fantasy fiction for teens and young adults, although let’s be honest, we all like magic and adventure, we’re all young at heart no matter how old we are. A wondrous world of lively breath-taking gemstones awaits you…

Book excerptCinnabar was sitting on a rickety old wooden chair; his cluttered desk behind him swamped under a small untidy stack of dusty old books and some rather odd bits and pieces that looked like antique laboratory equipment and ancient scientific instruments that would have been more at home in a museum or in an alchemist’s or wizard’s lair. In front of him was a small group of young children who were sitting cross-legged in a cosy huddled bunch, all staring up at him intently, transfixed and hanging on to every word the wise old man spoke. He knew all of the children in the town; he had blessed them all as and when they were born, as he had blessed all of their parents before them. His aged, experienced and knowing face, together with his husky voice was almost hypnotic to the children, eager to learn and take in what was being taught to them with such passion.“… and hundreds of years ago,” explained Cinnabar, “a powerful beast, a huge mighty dragon gave two crystal stones to a poor man who he knew to be good and honest”. Cinnabar’s story-telling voice carried the words with such enchantment that the children seated before him could almost envisage the wonder of the ancient times ….The mighty dragon towered over the meek, poor man who looked up at the beast with fear and dread. This terrifying, colossal creature could kill him where he stood with one breath of his fiery roar if he so desired. Armour of reddish reptilian scales, razor sharp talons, dagger-like teeth and his enormous tail, struck fear into all who saw it. The remarkable beast stood over sixteen feet tall and had a long, powerful, serpent-like body with giant wings stretching out from its back. But as the poor man found the courage to gaze up at the dragon, he stared into its menacing orange eyes and the more he stared, the deeper he could see. As if he was looking beyond the reptilian eyes into the depths of the dragon itself, into its very soul. The poor man had never seen eyes like it before. At one point he felt as though he was falling through space, a magical cloudy soup made from the colours of the dragon’s eyes and as he fell deeper and deeper within the dragon’s gaze, he began to feel that there was no danger after all. He was reassured, safe and protected, becoming as one with the dragon. The powerful beast that towered over him seemed no longer threatening or terrifying.“Never look a Fire-Tongue directly in the eye!” Cinnabar boomed as his softened voice erupted with a force that made all the youngsters jump as they remained seated in their semi-circular huddle on the cold wooden floor. “They will hypnotize you, they will fool you into a false sense of security, and they will put you under the dragon’s spell so that he owns you and controls your every move. 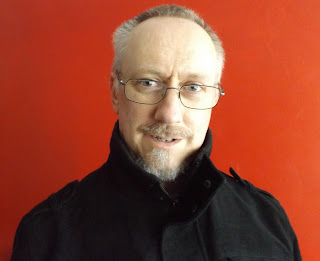 I’m a first time author and this, my debut novel, is now a self-published ebook on Amazon Kindle. I enjoy writing in a detailed and descriptive style of imagination and fantasy, exploring the far flung realms of mystic, magical lands of forgotten times.As time aplenty found me while injured out of my career as a Paramedic, I set to work on creating the mysterious world from the swirling ideas of my mind. Since leaving the ambulance service I have retrained as counsellor and I do voluntary work co-running a mental health support in my area. But it is writing and creating stories that I wish to pursue.I live with my wife and two children in Lincolnshire, England.

1. What authors and/or books influenced you growing up that led you to write in the Young Adult Fantasy genre?

Let me first thank you for giving me the opportunity to answer your questions. Actually although I write in the fantasy genre, when I was growing up I read Stephen King, Clive Barker and in particular James Herbert and Dean Koontz so the giants of horror! But I always wanted to create my own world and I was impressed with Tolkien’s world. I also like the way JK Rowling ran a magical world alongside our own. Creating a fully working made up society was something I always wanted to do and also having magic but a magic that would be logical and reasonable, I’m not keen on magic being used for magic sake. Although it’s all fantasy and make believe, for me it still has to be understandable and work logically. So I created the magical world of Heliodor, my book being The Legend Of Heliodor: The Crystal Spirits. I set the level for older children, teens and young adults because I wanted my children to understand the story I was telling.

2. I noticed you have a collection of short stories set in the same world that recently published. Tell us a little about that book.

Well after creating the world of Heliodor, I had the idea to expand on its depth by showing that there were stories, folklore and myths that the people of Heliodor grew up with. I thought that it would make a nice companion book to the main story and also provide a chance to delve a little further into this curious world. For example in the main book, The Crystal Spirits, I referred to a myth that a giant threw some trees and where they landed they grew as tall as the giant. So in my short story book Tales From The Realm I told the full story of the giant and those trees. Also I found it a great way to play around with various writing techniques and formats. And so some stories are in normal prose, some are told in poetic verse, there’s a tale told with letters between two people plus fairy tale style stories and even one in a nursery rhyme style. I had great fun writing in ways I wouldn’t otherwise have done.

3. Did you always plan on self-publishing or did you try to find an agent or publisher first?

I sent The Crystal Spirits to agents first as was the advice in the writers yearbook at the time but of course rejection letters flooded in! I found out the option to self-publish and liked the control an author would have. Very hard work though, writing the book was the easy part, marketing it though… well… not so easy!

4. What have you learned since you first published that you wish you knew starting out?

Probably everything! I tend to do things in the wrong order and end up making a lot of work for myself. So in true ‘me’ style I published my book then found out stuff I should have done before publishing! There are pros and cons for self-publishing so I would suggest researching first to find them out and also get important thing in place before you do so. Things like the book cover and the blurb should be sorted before you publish, which of course I did after!

5. What's next? What are you currently working on?

So next for me is I’m currently working on the next part of the story following on from The Crystal Spirits.

6. Tell us three great things about your book that might convince a reader to give it a try.

Like I said earlier, I have created a fully functional working world that is completely different to our own that can deliver some incredible magic the like of which has rarely, if ever, been seen before!
The whole story is based on an ancient legend. We’ve grown up with the Bible and the stories it tells so imagine what would happen to you if you found out you were a part of it with a vital part to play in it. Well that is what happens to Kyan, my main character.


I think lastly I would say that I have delivered an exciting caper that is fun but also with underlying aspects that we in our world can relate to. There are messages buried within the story, above all the message of belief in oneself that if conquered we can take on the world. This is something I feel passionate about as I also work in mental health and have suffered myself with debilitating depression.

Posted by Rose Montague at 6:26 AM