Please take your seat and strap yourself in, as we take you on an intergalactic tour. You will be amazed, entertained, and educated. Manoeuvre through the cosmos and be astounded at all you see. Hunt down the hidden words that will get you to your final destination where a one-of- a -kind award awaits one lucky traveller.

You are here to celebrate the release of Alienation, book two of the humorous Sci-Fi series, Starstruck. 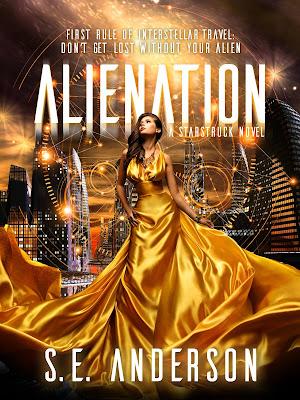 Sally Webber's dream is coming true: Zander is back and taking her out for a night on the town--on a planet hundreds of light years away from Earth.

But when an accident separates her from her alien tour guide, she’s thrown into the seedy underbelly of an insane city where nothing is as it seems. Suddenly lost and desperate to get back home, Sally is willing to do anything to get out, even if it means accepting spontaneous marriage proposals, crashing some fancy parties, or joining what appears to be the space mob.

All she wanted was some decent interstellar pizza, but now it might be the end of the world as evil nanobots and an out of control AI try to take the universe by force, and the only one who can stop them is missing in action. Sally has no choice but to try to stop them herself--if she can stay alive that long. 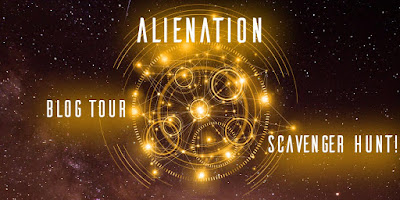 Follow this exciting blog tour starting at your first stop UrbanHype101 and if you get lost in cyber space, come back to UrbanHype101 for the tour map.
There’s something new to read see or hear on each of these stops.
Don’t forget to hunt for that special word and if you find ALL of them, send them to scavengerhunt@bolidepublishing.com and you could win a signed copy of Alienation and a gift pack of unique swag.
This contest is open internationally.

I thought he would take me to the massive passageway and into the heart of the block: but no, he led me to the mural towering over the rest of the landing platform, the brightly colored orbs on the black ceramic background, dizzying in number and sizes.
A star map. A huge, overwhelming star map, crafted in a glittering mosaic on the wall. Probably no more than street art for the people who lived here, but jaw-dropping for a little human from Earth.
"We're here," Zander said, hopping into the air to point at a specific star, "in the core of the Alliance. Earth's not even mapped... but your sun is. It's right about... here."
He pointed out into the distance, to a small insignificant dot.
"The Alliance stretches... all that way?" I asked, taking in the vastness of the mural.
Zander nodded. "You seem impressed, but they're small players when you think about it. I've seen civilizations spanning not just solar systems, but entire galaxies. Plural. Some had cities with hundreds, if not thousands of planets. These are just your closest neighbors, Sally. Say hi."
"Hi," I repeated, awkwardly. I was engrossed in the map, trying to take all the hundreds of stars in, the thousands of planets in this Alliance. It was surreal, seeing for myself the conglomeration of planets I had heard so much about but barely believed existed. It was more than my mind could process.
"They have the same name for it as we do?" I stared at the little orb Zander had pointed me too, with the little word 'Sun' staring back at me, overlaid on the art with hologrammed pixels which glistened in the air.
"Nah, your brain is telling you what you want to see. I told you, your translator’s top of the line."
"I didn’t think it would still work, after two years."
"Two years," he repeated, as if he still couldn’t believe it. He obviously did not want to dwell: his face went from being excited, to a flicker of a frown, to his usual grin again in the span of a second. "So, you're far from home, Sally: same galaxy, at least, so no worries there. Just a few light years. Where do you want to go next?"
"What's this?" I asked, touching a large silver orb sticking out of the wall.
"Sally, No!" Zander lunged at me, but it was too late. My fingers fluttered over the cold surface. A long, apple green man-thing appeared in front of the map. While it had the eyes and mouth of a regular human, it looked as if the rest of him had been squashed by a steamroller, then reinflated to give him some depth. The thing was semi-transparent, and when it moved its mouth, I could see all the way through it.
"Mr. Gilmag." Zander shuddered. The weird green thing advanced like it had seen us, smiling with an unnaturally wide mouth.
"Hi, I'm Mr. Gilmag! The Da-Duhui tourism board would like to welcome you to Kurai," he said, in an obnoxiously chipper voice, "please enjoy our outstanding locations for shopping and dining. I will be your guide on this journey of self-discovery..."
"Off," Zander said. "Program execute? Program Complete? Program Terminated? Zing? Zap? End? Exit? Escape?"
"May I offer you a brief history of our city?" Mr. Gilmag said, ignoring Zander's attempts to subdue him. "Ten thousand years ago, after the third galactic war, a treaty of nonaggression was signed between the planets of Pyrina, Da-Duhui, and Vorace. When a greater threat presented itself from beyond..."
"Just keep walking." Zander put an arm over my shoulders to steer me away from the eager animation. "He shouldn't be able to follow us past a certain radius."
"It can follow us?"
"And I can hear you," said the hologram, putting its hands on its hips. "It's rude to interrupt. I'm not sure what quadrant you were raised in, but-"
"Oh, my gosh, I'm so sorry."
I pulled myself from Zander’s arm and gave the hologram an apologetic look, but the poor thing looked so hurt. I wanted to walk forward and give it a hug.
"He's a program, Sally. He has no feelings," hissed Zander while trying to drag me away. "It's programmed to say that so you listen to the whole shpiel."
"So what if I am?" Gilmag scoffed, "it doesn't mean I don't have feelings about—"
With that, Zander pushed me back, and we were out of its sphere of influence. Mr. Gilmag disappeared into computerized nothingness.
"What was that about?" I asked, staring at the place the green man had just been.
"A fresh attempt to catch the attention of Millionials." Zander sighed. "You coming?"

Thanks for reading. Now hop on to your spacecraft and visit.

6th October BrhiStokes
Posted by Rose Montague at 1:48 AM