A couple of twitter related comments as I just passed the 7500 mark on followers. I believe I am now getting more sales from my tweets than any facebook or other social media promotions.
1. Don't buy followers. The best way to get followers is to engage and retweet those tweets that interest you. Participate in the hashtag ‪#‎FF‬ on Fridays. Start by listing those that have followed you recently or those that you think deserve more followers. Pretty soon you will see your name show up in these #FF tweets.
2. If you are promoting something please pin a post to the top of your tweets so others can easily find it and retweet it for you. There are a lot of people that want to help you with retweets. Change your pinned post often so that those that do retweet you can do it again.
3. I don't use a program to weed out those that don't follow me back but some people swear by it. There are a few people that I follow that I know will never follow me back but I still want to see their tweets. About once a week, I will scroll through about a hundred or so of the latest people I followed and weed out those that have not followed me back after a few days.
4. I don't use an auto tweet service, but some people really find that helpful. I would suggest you still remain an active real tweeter and engage people with comments, favorites, and replies at least occasionally. If you do use such a service try to avoid the auto DM feature. that really drives me nuts. Most times I get a DM from a follower that didn't bother to follow me back and it is irritating that I can't reply to them because it was an automated message and they have not gotten around to following me yet.
5. I try to have fun with it and limit my shameless self-promotional tweets to only 2 or 3 per day and less than 10% of my total tweets. I also mix in some non-promotional tweets on other subjects I am interested in like coffee, Star Trek, and cats.
6. Actually follow some links and read what people have to say on their website blogs.There is a lot of great content out there that people have put a lot of time and thought to posting.
7. Follow back as much as possible. There are some that you should not follow back like those selling followers. I get 2 or 3 of those every day that I ignore.
8. Don't piggyback on people's posts to promote your own stuff. That is pretty rude.
I would love to hear any other suggestions or comments about twitter that you may have. 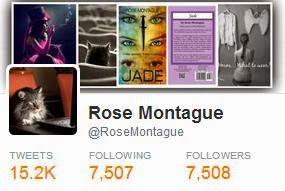 Posted by Rose Montague at 2:54 AM