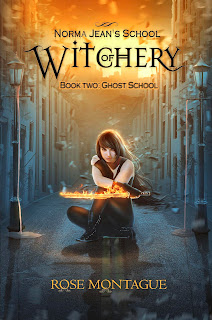 This is an unedited excerpt..  Copyright © 2015 Rose Montague


My sword, the Magic one given me by Mister Hiruto started vibrating, humming ever so
slightly in my hands.  For the first time I could feel my fire awaken within me, this time not
constrained by me but by the spell laid over the town.  My fire was not happy.  I could feel
my sword trying to connect with my fire.  I could only hope it would be successful.  The slight
humming was loud in the silence around, joined only by our footsteps as we walked to the
church.
“What's that sound,” Misty said as we approached the church.
“It's my sword,” I responded.  “It's magic seems to be working.  I'm not sure exactly what
it does,” I added.
A large raven buzzed us overhead, heading towards that church.  Shaman was here.
Hopefully he would give the rest of the team our status and they would head our way.  As I
debated filling the others in on my backup plan I was interrupted by Misty stopping abruptly.
“The dead are moving,” she announced. “Behind us now,” she added, turning around to
look.
We all looked.  Rows and rows of Zombies now stood blocking our retreat.  More
streamed out of the homes we had passed.  Hundreds of Zombies now filled the streets
behind us.  Silent and slowly approaching our position, they were obviously controlled.  Most
necromancers could control a single Zombie, sometimes even two or three.  With the aid of
the BFM device, L.O.T.D. had control of a whole town full of them.  I saw Shaman flying off
to our right.  Hopefully he would let our team know quickly.  I hoped he would do the other
thing I had asked of him as well.
We had no choice but to continue forward. Misty took the lead, walking up the steps to the
church and opening up one of the big double doors so we could enter.  The little church
graveyard we had just passed was also full of empty graves.  Ghost whispered to me that he
was behind me.  I hoped he was as invisible to the Zombies as he was to us.  His talent hid
him from all senses, only my ability to sense auras made him visible to me.  As my magic was
down, I had no idea where he was if he had not told me.
Misty entered and I followed.  The pews were full of Zombies, sitting silent and unmoving,
staring forward.  Ahead of us a four deep wall of Zombies stood silently between us and the
altar where we were to retrieve the demands. As we continued down the aisle, the Zombies
behind us left the pews and massed in a crowd.  The ones in front of us showed no sign of
parting to let us through.
Misty had two military knives out, one in each hand.  That was not going to be very
effective in getting through.  Ghost tapped me on the shoulder as he passed me and then I
saw Misty start as he did the same with her.  He had a Fae sword and was invisible as well.
He would try and get us through.  What we would do after that I had no idea, our options
were extremely limited at this point.

You can get Norma Jean's School of Witchery, Book One: Jewel here..
Buy Link Amazon