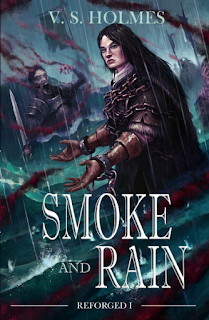 Please welcome to my blog, V.S. Holmes, author of Smoke and Rain, the first in the epic fantasy quartet, Reforged.

I expected a hero to save us all. Turns out, I was thinking of the wrong part of the story.
In the beginning, we aren't saved. The world is broken. There are only pieces and grief.  Depending on the story, the fruit of grief is vengeance or justice or hardened resolve. The pieces must be gathered and flames kindled before I'm reforged. I don't know what shape I will take. Those pieces might become  a hero...
...or a monster.

A mad king’s genocide destroyed Alea's home and left her sanity in tatters. The struggle between the gods and their creators fills the world with war. Caught in the crossfire of a conflict she knows little about, Alea wants only a quiet life. Trouble is, the darkness roiling in her mind may be the one thing that could end the bloodshed.

A storm brews within her, and not even the gods will be safe when it breaks upon the world.

The 31st day of Valemord, 1251
Despite having spent most of his last thirty-two hours on horseback, Bren's whole body hummed. His broadsword was drawn, stained with Laen blood. In the early dawn light he could make out the flashing flanks of the horse ahead. He saw his men dismounted along the forest's edge and slowed. His horse's muscles trembled from the effort to bring them this far. The Miriken stood in a wide circle around the base of a tree. They looked shaken, but no weapons were raised. Bren halted at the sight of the body lying amongst the roots.    He dismounted, armor clanking softly in the stillness. “Her guards?”
One soldier shook his head. “Gone, sir. They were here, working on her, but when they saw us closing, they took off.”
“Cowards.”
Bren frowned at the man who interrupted. He edged closer to the body, noting the surroundings. The girl was still. Her skin had the bruised cast of death, but he knew to take no chances. Finally, within arm's reach, he crouched. He tugged off a glove and felt for a pulse. “She's dead. Good shot, Doric.” He sat back on his heels thoughtfully. “Sorier, you and Gorden start digging. Everyone else, make camp nearby. We're done.”
His men slowly lurched into motion. He knew they were as tired as he, and they all deserved sleep. Besides, this is it. He could not look away from the girl's face. Her eyes were wide and her brow furrowed. He knew that expression. He noted the depressions where her guard's had knelt and the scattered evidence of attempted surgery. He finally found his knife and began to work on her fingers. The job was quick, and he had the small token wrapped in his kerchief within a minute.
The strength left Bren's limbs all at once. He managed to sit in the dirt with some dignity, but rested his head between his armored knees. The smell of blood was so familiar it went unnoticed among the other battlefield scents. He was tired of it. He tugged his helm off, too stifled by the smell of his own sweat. After several deep breaths he lifted his head.
“Fullsen!” Even his battle-shout sounded weary. They had reached the tree line two hours after dawn. The six Laen he had tracked from the mountains were finally dead. He managed to haul himself upright and be standing when the boy skittered to a halt before him.
“Lieutenant, sir?” He swayed where he stood, and he no longer had an arm on his right side. He seemed not to notice either.
“You wounded?” Bren peered at the dirty bandages.
“Healer fixed me up proper. Got a good story for the women!”
Bren shook his head. Fullsen's age was closer to a toddler than a man. “Can you pen a missive?”
“Surely, I scribe with my left anyways.”
Bren nodded once. He could not say that his own hands shook, that he feared he would be sick all over the parchment if he tried to write the letter himself. He tossed over his writing kit and gestured to the campstool someone had erected for him. “Address it to Milord King Azirik. He's on the coast now, I think.” He shook his head to clear fog from his thoughts. “We found the women. Just south of Marl Bodi, as expected. There were only six. They had guards, but we separated them. The Laen were cut down. One among them was the girl. She wore armor, and the others protected her above all else, above their own lives. We chased her to the Hartland, but she was already dead, shot down during pursuit.” He paused, as much to draw breath as to fight back nausea. Is it normal to feel this way when war is over? “I am confident that she was the Dhoah' Laen. I will await your orders. Signed Lieutenant Barrackborn.” He handed over the carefully folded kerchief. “Send this with it.”
Fullsen had carefully scribed each word, tongue clamped between his teeth in concentration. When Bren finished he glanced up. “Lieutenant, sir, permission to ask a question?”
“Yes?”
“Sir, is this true? What you just had me write. Did we really destroy the Dhoah' Laen?”
Bren frowned. “Yes. I suppose we did.” They had won. He had won the war his king began two decades ago.
“You killed her?”
Bren almost nodded, then shook his head. “Doric killed her. Arrow in the back.”
The boy leaned forward, his eyes hungry for more of the story. This was the event every Miriken boy was trained to work towards. “Did you see them? Did you see her? What did they look like?”
“I did. They were tall, I suppose. Hair blacker than night and skin that glittered, like dusted with silver.” He knew it sounded stupid, too poetic, but Fullsen was a boy, and a boy would not care. “Their eyes were silver. You could feel their power, cold, like walking the beach in winter. It was strange. Everything around them, even battle, seemed muffled.” He sighed. “I've fought them many times, but this was surely different.”
“What about the Dhoah' Laen?” Fullsen asked, rocking forward on his toes. “Was her skin made of metal? Did she have the black claws? Blue blood?”
Bren glanced up, staring at the boy, but not seeing him. He saw a face frozen in panic. Clouded eyes. "No. She looked like just a girl.” 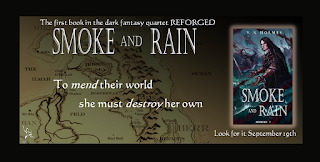 V.S. Holmes lives with her artist partner in a Tiny House (yes, like the FYI television show) and owns far too many books for such a small abode. Her favorite genres include fantasy, science (of both the non-fiction and fiction varieties), and most anything else she finds in her hands. While not writing, she works as a contract archaeologist in New England. 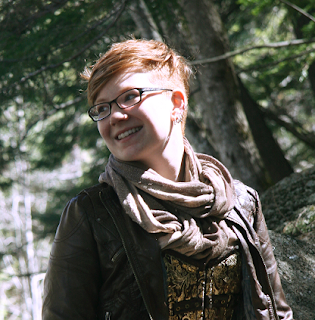 1. Congrats on your new release. How has the feedback gone so far?
Thank you! The release has been fantastic. I've had a lot of support from fellow authors and am really impressed by the community. So far the feedback has been wonderful as well -- 4 and 5 stars! I'm so pleased.

2. That's a long book. Writing Epic Fantasy must take a lot of time. Are all your planned sequels to be of similar lengths? What is your writing routine and how long did it take you to write this book?

Fantasy tends to err on the long side. A lot of the epic fantasies now are in the 120K word range or more. My sequels are all of comparable length to the first. The second book, Lightning and Flames, (out in May!) is just over 100K. Originally the quartet was a duology, but I chose to split the books in half so as to be more manageable to a variety of readers, not just die-hard fantasy fans.

My writing routine is often "wherever, whenever." I have a full time job that requires a lot of travel and very few nights at home, so that has changed my routine a lot. I try to get 500 -2000 words a day, usually in the evening. I have several projects going on at a time -- one manuscript will be undergoing final edits while I'm revising another and often rough-drafting a third. Smoke and Rain technically began in 2003 as a stand-alone, but I've been working on this iteration (and the series) since 2006.

3. What authors and books influenced you growing up that led you to write in that genre?

I loved Tamora Pierce's Song of the Lioness quartet as a kid as well as Robin McKinley's Blue Sword and Sherwood Smith's Crown Duel. All have women that are at turns tough and tender.

4. What has surprised you about the publishing experience so far? What has been something that you wished you knew at the beginiing?

I wish I'd known how difficult formatting a cover could be -- formatting the book was a breeze in comparison -- and known to set time aside to face all the obstacles that arose after the book was complete. Luckily I've got some troubleshooting now for my future work.

I did a lot of research about both traditional and indie publishing, so there weren't many surprises. I think something I wasn't expecting, though, was how fantastic the community is. There are so many fantastic writers on social media -- Twitter is my favorite -- with whom I've been able to connect.

5. What would you say to someone reading this that might convince them to give your book a try?

There are two prominent journeys in my book -- the overarching journey of the characters through a war-torn landscape, but more importantly the journey of trying to find footing after losing oneself. Everyone has slipped into a dark place after loss or change. The undercurrent of Smoke and Rain is very much in that vein.