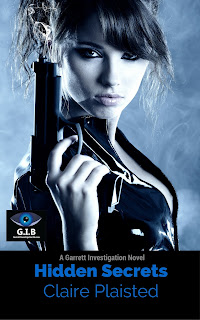 
Hidden Secrets in the first book in the Garrett Investigations. A private company based inn New York.

Anastasia Belaruski is the best agent within the company, getting her work done, never letting the side down – well until thing start going wrong on her assignments. It seems someone is out to kill her. Along the way Anastasia discovers some Hidde Secrets about her birth. Who is she really and why does her boss Malachy Garrett start getting under her skin, making her desire more than she should.

Read this fast paced mystery murder romance with its twists and turns in the most unexpected of places.

Extract from Hidden Secrets – Malachy is in hospital, Anastasia rushes to his side…

“He became part of a shootout ending with his car exploding. He had a slug in his shoulder, lost lots of blood which explains why he’s still here fretting away,” Yuri grinned.
“He’s never good with hospitals, may I go in.”
“Yeah sure, make it quick though Ana.”
Quietly opening the door, she looked over at the bed. His shoulder and chest were strapped up with bandages, scrapes and cuts along his arms; the drip made her smile. She knew he hated them, mainly having a needle in his arm. Closing the door behind her, she approached his bed thanking God he was all right, she’d not realised they’d attack so soon. Kissing his forehead, he woke drowsily at her touch.
“Hmm you smell beautiful Anastasia,” Malachy reached up his hand to the nape of her neck, drawing her closer, “Just one kiss Ana, help make me feel better.”
Before she could move back, he kissed her gently but firmly nibbling his way across her lips, nipping her bottom lip to gain access to her mouth. Ana moaned returning his kisses, teasing and tasting. His hand fell away from her neck, bringing her back to her senses, pulling back heart pounding; she stood looking down at his drowsy face, sighing sitting in the chair beside him.
“So you’re not too bad then Mal. What the hell happened?”
“Did you come rushing back Ana,” he asked in sleepy amusement.
“Of course I did, it wasn’t funny when I realised it was you and not some idiot.”

Buy Hidden Secrets at these places: Claire Plaisted lives with her husband and three children in beautiful Rotorua, New Zealand. Claire is a Family History Researcher, researching and formatting books for family, friends and clients.

Whilst waiting for information for a Family History Book, Claire accidently discovered her skill of writing novels of different genres. Though having to re-learn some grammar skills, her books are a great read.

Since this time, Claire has also started a formatting business to help Indie Authors get their books online with a professional style that looks great.

Claire has published 11 of her own books though at present one series is undergoing changes and is been re-released over the coming weeks. All her books can be found on Amazon and Smashwords, with a few also in print.

It looks like you write in several genres. Do you have a favorite? I'm curious what books and authors influenced your writing.

I love them all. My first book was a Regency Mystery Romance which I have yet to publish. It was a great learning curve and still needs a bit of work. Next I went with an Investigator Series, then I wrote a young children’s, to prove I could write without doing sex scenes. I think I must be trying all genres out still so at present I don’t have a favourite. The books I have loved over the years or should I say authors are Elizabeth Goudge, C S Lewis, Rudyard Kipling, Mark Twain the going on to Lee Child, Nora Roberts, Clive Cussler etc. I have no idea if or how they may have influenced me, though I do love the saying from C S Lewis that a great children’s book is one that can be read by any age. I try and do that with mine, though at present only one is published.

Tell me how you got started in your formatting business and how you balance your time between that and your own writing.

Part of it was sheer frustration with Publishing Houses. It is so hard to get in the door and so frustrating when they say…” Not right for us,” without any further details. So I went about learning to format and publish online. Taking my books to my local writers group, one author asked me to format his book – this is how the business came about. By July 2014 I had a registered company and I have been building my client base ever since. Work is generally done during the week and writing at the weekend and nights unless I’m not busy, then I may write for a few hours. I’ve not written much this year though I have a lot of drafts to finish.

Have you always wanted to self-publish or did you try and find an agent or publisher first?

I looked for an agent and publishers. I didn’t take to either. Self-publishing is easier if you know how. Today I help publish other Indie Authors and it’s great to see them smile.

What have you learned since publishing your first book that you wish you had known when you first started?

Oh my, what I lot I have learnt. If it wasn’t for my friend Tina I’m not sure I would have continued. She taught me POV, First & Third person, and helped me with my grammar which over the last three years has improved greatly. I have met many other writers who also helped me along the way. I also had help from Sharon another friend who caught me using the wrong tense of certain words. So I wish I’d had more knowledge at the beginning, though learning it on the go means I retain the information much better.

Tell me three great things about Hidden Secrets, something that might convince a new reader to give your book a try.

At the moment ‘Hidden Secrets’ is in the top 100 in two categories on Kindle and has been for over a week now.

The story is fast paced with lots of twists and turns you may not be able to work out until you read it all. I love to make people think. The reviews I’ve had just blow me away; several readers love the first book they were demanding more. I can’t wait to finish uploading the series and publish book Six. Just so you know ‘Hidden Secrets,” was previously called ‘Malachy’s Unit,” of the Garrett Investigation Bureau. Malachy is gorgeous and falls for Anastasia, while she tries to push him away.

Posted by Rose Montague at 2:38 AM