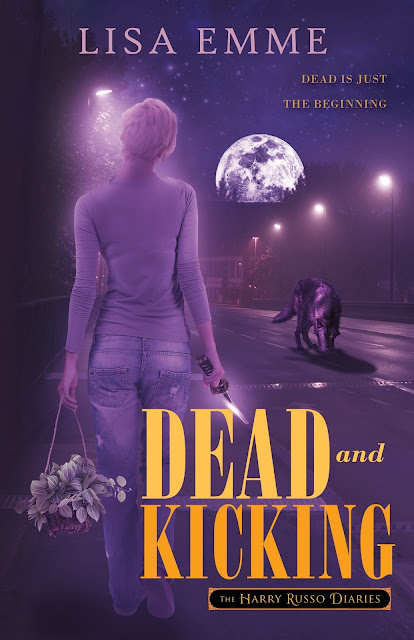 Angharad ‘Harry’ Russo is just your ordinary twenty-something, with one exception - she’s a witch with an out of the ordinary gift. When her blind date goes sideways and she ends up face to face with a dead body, her life starts to go sideways too.


Harry soon finds herself right in the middle of the mayhem, dealing with Cian Nash, a homicide detective that is as aggravating as he is sexy; the biggest, baddest vampire in town; and a parcel of pesky zombies that keep popping up everywhere. It’s all connected to her date’s unfortunate demise, or is there more to it than meets the eye?

…I crept as quietly as I could, but it was pretty much a given that I couldn’t hide from a vampire’s amped up hearing or sense of smell. When I reached the end of the wall dividing the hall and the kitchen, I started to peek around the corner only to be abruptly grabbed and thrown against the wall.

“Gaak!” I said. Hey, you try talking when a six foot goon with the strength of a vampire has his arm cross your windpipe.

Tomas had pinned my knife hand as well as my throat. He grinned at me smugly. I could see Salvador lounging unconcerned across the room. My vision began to blur from the lack of oxygen as I let my knees give out a little, shifting more of my weight onto his arm. Surprised, he loosened his grip enough that I was able to take a rasping breath. I quickly brought my knee up to his groin as hard as I could. It was satisfying to know that whatever he was, he still felt it when he got one in the ‘nads. Tomas let go of my arm and I slid down the wall. Unwilling to hope that a shot to the junk was enough to keep him down, I followed through with a quick punch to his throat. He fell to one knee and I sprang away…

Get your copy here: 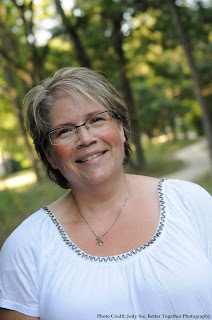 Lisa has been a storyteller from practically the day she was born.  Known to have told a tall tale or two as a child, she has always had an active imagination. A voracious reader, Lisa has been preparing for this adventure in writing since she first became hooked on Fantasy novels at the age of ten.  After reading hundreds, if not thousands of books, she finally felt it was time to put her thoughts on paper. The Harry Russo Diaries is one of the first ideas to battle its way out of the deep dark crevices of her mind.

When I started putting the info together for Lisa's spotlight I was inspired to purchase a copy and read the book. I'm so glad I did. It's a FUN read! Check out my 5 Star review on Amazon & Goodreads! It's got everything I love in a fun book, vamps, shifters, witches, & a kickass heroine. The cool thing is that Book Two, Tooth and Claw, just released a few days ago! More reading fun ahead.... 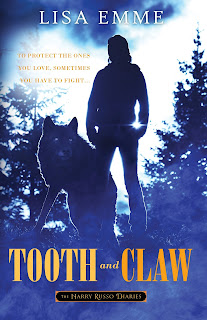 1. Both the great cover and the blurb of Dead and Kicking convinced me to buy your book. Tell me about your experience in getting a good cover and blurb put together.

When I decided to publish my book, I knew I needed to present a professional image.  The cover is so important for that image.  To find a designer I surfed the web, looked at the covers of books similar to mine and then took a closer look at the designers who created them (this information is usually listed on the copyright page of the book), looked at their other work, their websites.  Eventually I stumbled across my cover designer, Scarlett Rugers.  I really liked her work and the professional image her website portrayed.  She had a variety of different levels of services that also appealed to me.  After contacting her and a bit of communication back and forth, I signed up with her to design the covers of all three of the books in the Harry Russo Diaries.  It was a smart decision.  Scarlett has been great.  She made the process really simple. After I signed with her, she sent me out a questionnaire about my books that really made me think about what I wanted to see (or not see) on the cover.  I also liked that she seemed to be truly invested in helping me get the most out of the experience.  I enjoyed being on her mailing list and receiving some insightful and useful information about the various stages of publishing.

Writing the blurb for the back cover of the book was a lot harder.  You’d think if I could write an entire book then writing a short description of it should have been a piece of cake, but it wasn’t.  How do you take everything that you think makes your book great and condense it down to about 150 words?  It was a struggle. Your book blurb is like a pick up line to the reader. The cover is the little black dress that draws attention but if your pick up line sucks, you’re going to strike out. That’s a lot of pressure to put on a few sentences.  In the end, I think I have created an enticing package for Dead and Kicking and the other two books in the trilogy. I hope readers think so too.

2. I love vampires and shifters and I also write about them. I'm curious what books and authors in this genre influenced you.  What are some of your favorites?

I love them too. Some of my favourites are the Anita Blake Vampire Hunter series by Laurell K. Hamilton, the Chicagoland Vampires by Chloe Neil, Keri Arthur’s Riley Jensen series, the Hollows series by Kim Harrison, Charlaine Harris’ Southern Vampires, Kelley Armstrong’s Women of the Underworld….I could go on and on.  I am a total book-a-holic.

3. Tell me about your publishing experience.  Did you try and find and agent or publisher first or did you always intend to self publish?

When I wrote my first novel (the romantic suspense, Home Again), I had no clue how to get published, but I found a publishing house that was accepting unsolicited manuscripts and spent several months putting together the submission (if you think writing a blurb is hard, try writing a five page synopsis).  I really didn’t expect to get anything but a rejection letter back, figuring I would have to ‘pay my dues’.  Of course, that’s exactly what I received a few months later and that was that.  I really had no desire to jump through any more hoops trying to get published.  Fast forward a couple of years and I had written the Harry Russo Diaries. Self-publishing had become much more prevalent and accepted and the more I looked into the idea, the more I liked it.  Why jump through the big traditional publishing companies’ hoops, give up control over your own creation and get paid next to nothing for it?  Self-publishing just made so much more sense.

Writing the book is the easy part! I’m not kidding.  I really wasn’t prepared for how much work and how time consuming it is to market a book.  Now that I am in the deep end and paddling furiously, I wish I had known ahead of time about setting up a social platform and getting that aspect rolling well in advance of actually publishing instead of trying to do it all at once.

5. Tell me three great things about your book that might convince someone else to buy Dead And Kicking.

1.) Dead and Kicking is meant to be a fun, light read. 2.) Harry is just an ordinary twenty-something despite the fact that she’s a witch with an extraordinary gift.  She’s not your stereotypical ass-kicker that is so common in urban fantasy, but she can certainly go toe-to-toe with all the alpha males that seem to surround her. 3.) She has a great supporting cast including a hot and sexy alpha male werewolf, a couple of handsome mysterious vampires, and there’s enough sexual tension to leave you wanting more (but don’t worry, there’s two more books).

Posted by Rose Montague at 5:06 AM