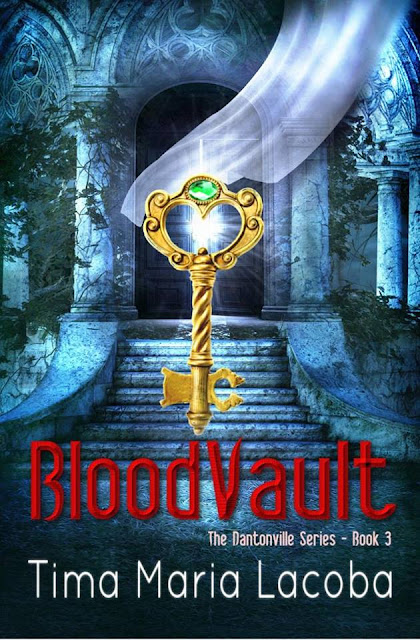 Hidden in caverns deep beneath Chateau D’Antonville in a misty French valley, lies a priceless treasure – the Bloodvault. Containing thousands of Ingenii blood vials, just one sip enables a vampire to daywalk. For nearly eighteen-hundred years, the family has kept the vault’s existence secret from the Brethren. But now, the Rebel leader, Count Timur, has learned of its whereabouts.

Faced with an imminent attack on her family's ancestral home - Chateau D'Antonville - Alec and Laura must flee Sydney to confront this new threat. But the Rebels are not their only enemy. Will Count Timur leak the secret of the vault, and cause even their loyal allies to turn against them?

With the very survival of the Principate at stake, Alec and Laura must try and persuade her father, Luc, to share the secret and open the Bloodvault or risk losing everything.

In the midst of this, from among their own, comes a betrayal so deep, so unexpected ...

Before we’d left Sydney, despite Luc training me to tune out the noise, it had still
been sensory overload. By contrast, this place seemed quieter – few human voices could
be heard. Perhaps that was why Luc had placed the perimeter wall at such a distance
from the chateau, not only for protection, but to create a distance between himself and
the incessant chatter of thousands of human voices. Brethren servants, too, must
welcome the break from the babble outside the walls.

My stomach growled. Through the open door, I spied the tray of delicacies
Madame Thierry had prepared. The mini baguette I had earlier had been delicious.
The bed bounced as I bounded toward the tray. That’s when I heard it – a shrill
keening, like a soul in torment. It made the hairs on my arms stand on end. It didn’t
seem to be coming from anywhere within the chateau. A night bird? I stuffed another
mini-baguette into my mouth and padded to the window. Tree branches obscured most
of my view, but there appeared to be a solitary figure, in white, standing on the boundary
wall at the far end of the estate.
Mesmerised, I watched. Was it a ghost, or some local nutter who liked to climb
walls in the dead of night to wail at the half moon? I peered closer, but the wind whipped
up the tree branches, and I lost sight of the figure. When the wind dropped, the figure
was gone. Every nerve ending tingled. If vampires existed – I’d only learnt of their
existence a couple of weeks ago – then why not ghosts? This chateau was hundreds of
years old, maybe more. Who knows how many people had died here in that time?
Vampires weren’t the only inhabitants.
I continued to stare out the window. There it was again – arms upraised, the
same high-pitched wailing. A chill shot through me, and I jumped back drawing the
curtains together, tightly bunching the folds of fabric. 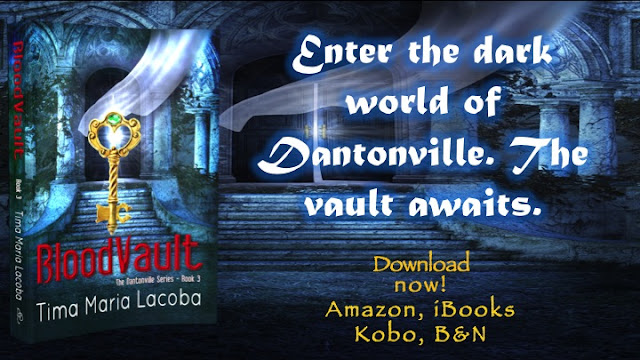 Tima Maria Lacoba is a former ancient historian and archaeologist who accidently smashed a 3,000 Egyptian vase while on her first dig! Her supervisor made her glue it back together again. It took a week. From there she went on to specialise in late Roman-British archaeology, and the military forts along Hadrian’s Wall, because buildings don’t smash as easily. Now Ms Lacoba’s combined her love of history with another passion—story-telling—to create a dark tale of Roman soldiers cursed by a British witch.

Tima Maria has always been a storyteller, but it wasn't until five years ago that she seriously ventured into writing. The result was Bloodgifted. In 2011 it was shortlisted in the Atlas Award and eventually came fourth place. In 2012 it was listed among the top ten in the Choclit Search for an Aussie Star Competition. In 2013, she was offered a publishing contract but declined in favour of going indie, preferring the idea of being in charge of her own creation.

Bloodgifted is just the start of a four-part series entitled, The Dantonville Legacy. Book 2, Bloodpledge, was released in 2014, and Book 3, Blood Vault, is due for release for Christmas 2015. She also intends to satisfy her fans requests by writing individual books on the other characters in the series. So Terens, Cal Jake and Sam will each have their own story.

Tima Maria currently lives on the Central Coast, an hour's drive north of Sydney in Australia. Her little house is surrounded by bushland, possums and seed-dropping Rosellas on one side, and waterways on the other.
Between bouts of writing, she can be found in the kitchen baking yet another chocolate recipe. This activity is responsible for forming more gothic, urban fantasy stories in her mind for future books.

1. I love vampire books and yours look great. I have found many books have different vampire abilities, strengths, and weaknesses. Tell us about the Vamps in your books.
Because my vampires are the result of an ancient curse, I gave them strengths and weakness based on the parameters within that. Like traditional nightwalkers, they can’t tolerate the day except for one day in every year (sorry, no spoilers  ). Yep, they’re beautiful in appearance as are all predators who need to attract their prey, but their greatest strengths lie in their sense of justice and desire to hold onto what’s left of their humanity.

2. I noticed that you recently had an amazing run of sales on your first book. How did you promote and market that book to get those awesome numbers?
Unless you wish for your book to sink to the bottom of the millions of books available online, you need a marketing plan. If people can’t see your book they can’t buy it. I tried all the Facebook book blogger sites, Google and twitter but they don’t always translate into sales. When they do, it’s great, but it’s not reliable.
So I decided to set myself a marketing plan of no more than $100/month. That’s sustainable for me and generally comes from my royalties. By doing so I’m treating my writing as a business – you need to invest to get something back.
Every week I promoted the first book in my Dantonville Legacy series to four different online book subscription sites, including boosting one of my promo tweets on twitter. I found posting on Wednesdays gave me the best results.
As you can see I went over my budget this January, but that only happens 4 times/year.
For February, I’ve booked:
My ranking went from 200K something to 2,576 overall in Kindle eBooks and #3 in Gothic Romance. Now it’s a matter of me trying to maintain that with my weekly promos. At the moment, Bloodgifted is sitting 50K and still within the top 100 in my category. That’s a huge improvement from where it sat before. It’s also led to sales of the other books in the series, improving their ranking as well.


3. Did you always plan to self-publish or did you try to find an agent or publisher first?
I seem to recall writing to one agent, who didn’t respond until two years later. By then I’d forgotten all about them! I didn’t bother wasting my time trying to contact agents after that. When I’d completed the first draft of Bloodgifted, I sent out six query letters to publishers and the fifth one offered me a publishing contract. Unfortunately the contract did not suit me, and the more I researched self-publishing the more I liked it. For me, it seemed the best route to publishing. It’s wonderful that writers these days have the choice; you don’t have to go the traditional way. Many of my author friends are hybrid: one series is traditionally published, while their other one is self-published.
I like being indie. But mind you, if a great publishing contract came my way, I would seriously consider it.

4. What have you learned over the course of your writing and publishing that you wish you knew when you first started out?
Treating my writing as a business. I believe every author – whether indie or trad. pubbed – needs to understand how to market their work. You could have a winning story on your hands, well written and edited, with a eye-catching cover, but if it lacks visibility, it will languish in obscurity. We don’t know how many amazing stories are waiting to be discovered because they don’t appear on the best-seller lists.

5. I see you have gotten quite a few really nice reviews. How do you get reviews and how does it make you feel when you get a good one or one that is not so good?
That’s a hard one. Since Amazon’s changes to their review policy it’s impossible to bug your family and friends to provide those all-important reviews, lol. Seriously, I rarely ask unless I see someone has left a nice comment about my books on facebook or twitter then I politely ask if they wouldn’t mind leaving a review, even if it’s only one sentence. Otherwise I use Goodreads Giveaways hoping to get some reviews in return. But that’s not always the case. It’s actually taken 4 years to gain the 90 I have on Amazon, just through organic growth.
Of course, I’m always thankful for a good review, and yes, I have received the dreaded one star as well.
It’s best to focus on the majority ratings, and if they’re mostly 4-5 star then you’ve done well. You can’t please everyone, because no matter what you write someone will find fault with it somewhere. Best to ignore it.

6. What are your current writing projects?
I’ve started on Book 4, Bloodwish. At this stage, it’s the concluding book in the series, but … you never know 