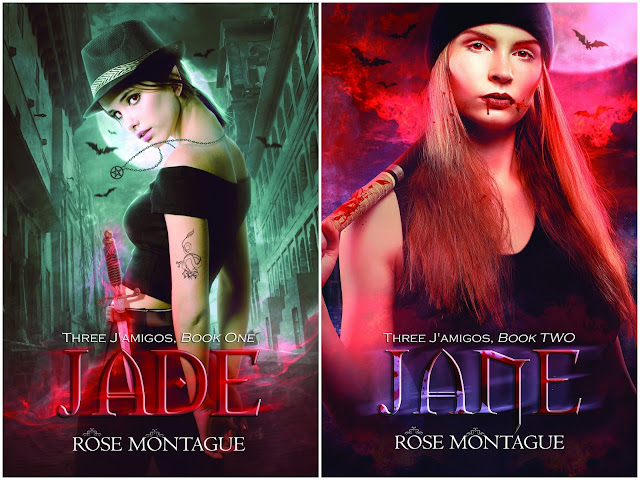 New covers, new blurbs, a new round of edits, and I've added those chapter titles that I love to do. Both books are now available both in print and eBook on Amazon.

Jade:  Meet Jade Smith, a magical mutt with a mission. A detective partnered with a shifter named Rolfe, she’s on the case to solve a slew of murders: Vamps are killing humans, and nobody knows why. When London Jane, the most powerful vamp in town, is implicated in the murders, Jade knows something isn’t right. Together with Jill, the Winter Queen of Faerie, Jade and Jane take their investigation underground. On the run, with nowhere to hide, they uncover a secret that could destroy Faerie, as well as the human realm. Will Jade stop the killer in time? Or will she be the next victim? Magic, mayhem, and mystery abound, and the odds are stacked against them; it’s three against three hundred.

Jane:  Jane & Jade are chasing the Devil around the world. That's probably not the smartest thing to do and when the hunters become the hunted, the action really gets rocking, leading to a non-stop thrill ride of a road trip. Vampires and Shifters, Angels and Demons, throw in a giant troll and some witches and you've got a paranormal war. That doesn't leave much time for romance but there is a wedding, and a funeral, and both are ones you don't want to miss. Take a ride with Jane & Jade!