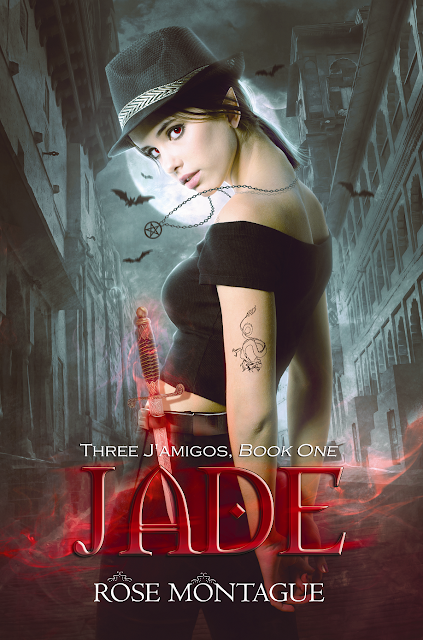 1. "I held the dagger up and the light of heaven shone forth, brilliant, seeking every shadow and filling it with that light. Other than Emily, the rest had turned their eyes away from it. She was stronger in her magic and I could tell she was fascinated by the dagger. I withdrew my dagger from my right boot sheath, a close copy I had found, very similar in design and replaced it in my boot sheath with the Sicam Tenebrarum."
2. ""Nice tattoo," he said, I looked at my arm and in the same place where the little dragon had been when I went to London Jane's party, was now a pentagram tattoo, perfectly formed. Looking at the TV again and smiling he asked, "Your doing?"

"Maybe so," I said, smiling as he pushed buttons on the remote, to no avail.
"Mayberry will just have to do," he replied, setting the remote back down on the bar."

Meet Jade Smith, a magical mutt with a mission. A detective partnered with a shifter named Rolfe, she’s on the case to solve a slew of murders: Vamps are killing humans, and nobody knows why. When London Jane, the most powerful vamp in town, is implicated in the murders, Jade knows something isn’t right. Together with Jill, the Winter Queen of Faerie, Jade and Jane take their investigation underground. On the run, with nowhere to hide, they uncover a secret that could destroy Faerie, as well as the human realm. Will Jade stop the killer in time? Or will she be the next victim?
Magic, mayhem, and mystery abound, and the odds are stacked against them; it’s three against three hundred.
Posted by Rose Montague at 12:00 AM