I love teen reads and when vampires are the main characters, it's all good! It's my pleasure to present a spotlight and review of the latest book in the Vamped series, Fangedemonium.


Fanged and fabulous…and hunted.
Gina Covella, fashionista of the fanged, and her entourage are primed to reveal the existence of vampires on the popular Ghouligans television show, when their former federal handlers swoop in to shut them down and imprison the vamps in one of their super secret testing facilities. Or not so secret, as the gang knows all about the horror hospitals and has sworn to take them down.
Their daring escape runs them right into the arms of “the resistance”—a group of humans and vampires who’ve joined together to stop the fighting that’s made Gina and her boy Bobby’s hometown a bloody battlefield. Going home brings them back to old nemeses as well, including the psycho psychic who declared Gina “chaos” and Bobby “the key”. They hope he’ll unlock the secret of stopping the Feds’s freakshow experiments for good, because they’re building up to something big. Huge. And they’re consolidating their power in the Big Easy, aka New Orleans, where what’s cooking is nothing less than the final showdown. 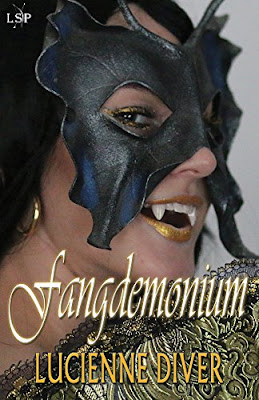 Alistaire . . . I still held the breath I’d taken. The moment suspended in time as I studied the sunken face of the psycho psychic I’d first met back in Mozulla. He’d been twisted into something both more and less than human—well, than vampire—by a failed murder attempt by his blood-daughter. He’d been too strong to die, and the spell too strong to leave him whole in mind or body. Or maybe he’d been half crazy to start. I hadn’t known him before his transformation, only after, when his body took on extra joints that bent every which way, giving him a spider or cricket-like appearance when he articulated to his full potential. I’d first met him when he’d menaced Marcy. The memory of his mindspeak skittered through my brain like swarming spiders.
Oddly, he’d saved my life several times over. He’d also threatened it, along with the lives of those I loved. He was nothing if not unpredictable. But still, I owed him. And no one deserved what I saw in that drawing. Tubes went into and out of him, and restraints bound him to a hospital type bed. He seemed to have become one with the mattress, making barely a dent in the sheets. The flesh of his face was nearly melted away so that his skin outlined bones and gristle. He looked like a living mummy, and I could tell the living part only because he was staring at the camera, his eyes as bat-crap crazy as ever, looking like he wanted to kill and eat something, but not before playing with his food.
“Holy crap,” Bobby said, staring with me.
“What is it?” Marcy asked. “I’ll trade you.”
I traded her the sketch for the note. I didn’t want to hold it one second longer than I had to anyway.

Throw in some great side characters and just the right light touch of romance and you have another winner. Book Five is undead!!!

In prepping for this post I saw quite a few comparisons to other authors and other series. I'm reminded of Betsy the Vampire Queen by Mary Janice Davidson. A teen version of that with even more action. The whole series is just great fun and if you haven't read any of these books, I'm going to link to the first one. I urge you to give it a try. Great Reads!!!

Get Vamped (Book One):  https://www.amazon.com/Vamped-Lucienne-Diver-ebook/dp/B06XY53343


GIVEAWAY
There’s a tour-wide giveaway for copies of FANGDEMONIUM and a Rafflecopter gift certificate for 20 dollars! Open to US residents only.

Lucienne Diver is the author of Vamped young adult series (think Clueless meets Buffy) and the Latter-Day Olympians urban fantasy series from Samhain, which Long and Short Reviews called “a clever mix of Janet Evanovich and Rick Riordan”. Her short stories have appeared in the KICKING IT anthology edited by Faith Hunter and Kalayna Price (Roc Books), the STRIP-MAULED and FANGS FOR THE MAMMARIES anthologies edited by Esther Friesner (Baen Books) and her essay “Abuse” was published in DEAR BULLY: 70 Authors Tell Their Stories (HarperCollins). More information can be found on her website: www.luciennediver.com.