Adventures In Driving (Excerpt from JADE)

I had a reviewer recently that mentioned this scene from Jade and a few people told me they also got a kick out of it.

Jade does a lot of things well but driving is not one of those things.

Excerpt from Jade by Rose Montague:

Once we arrived at the prison, we quickly switched places to
the vehicle the warden had left us, what looked like a brand new
Mercedes sport utility still with the temporary tags on it. The
others all beat me to the passenger seats. You would think somebody
like me could drive, what with great eyesight, super-sharp
reflexes, and excellent coordination. For some reason, I was just a
terrible driver. My few experiments with driving had resulted in
multiple collisions and terrified pedestrians. I hadn’t seriously injured
anyone and I didn’t want to. I especially didn’t want to hurt
the warden’s car. After several failed excuses I tried to settle on
the truth, telling them I had obtained a driver’s license through
less than standard means just so I could get this job. I had even
had to use a bit of glamour and witch magic to escape having to do
my driving training at the police academy. They insisted it was my
turn, and that I was a terrible liar. Big sigh.
“Okay,” I said, “Seat-belts please.” I barely missed the little
gate house where you exit the prison and didn’t quite stop in time
at the crossbar and nudged it just slightly, fortunately not breaking
it. The guards looked at me through our tinted windows, just
shaking their heads as I painstakingly jerked the car back a few
feet so they could raise the gate.
“You are a terrible actress as well,” Rolfe said, as I weaved
across the road leading from the prison, heading into town. Chris
and Sarah were in the back, Chris had his phone out and they
were trying to give me directions.
“Can you just tell me to go north, south, east, or west for right
now?” I asked. I was having trouble focusing on the directions
and concentrating on not hitting anything at the same time.
As soon as we had reached the outskirts of town, a black
Explorer came out of nowhere and rammed us, hitting at my front
right side and sending me spinning. Instinctively I had turned the
wheels in the other direction and pounded the gas resulting in us
doing a 360 and I was heading back in the same direction, pedal
to the metal. I screamed, and for some reason decided punching
buttons on the console would help. Born to Be Wild started blaring
out of the stereo system, volume cranked to the max.
Two more black Explorers came towards me from ahead. I had
built up some distance from the car behind us. I screamed yet
again, although I doubt anyone could hear me over the stereo and
jerked the wheel to my right, flattening a mailbox and sending
somebody’s trash can airborne. Some poor dog in front of me took
off. I barely missed running him over. I tore through the front
yard of about five homes, one had a really nice picket fence, now
with a Mercedes-sized hole in it. I could see some kids in the next
yard ahead, staring at me, eyes big, frozen in terror. I jerked the
steering wheel to the left this time, still with my foot all the way
down on the accelerator, I was probably going to punch a hole in
the floor, I was pushing so hard. The drivers of the two Explorers
flanking me looked at me as if I was crazy as I accidentally clipped
the lead one in the rear and the back one in the front, somehow
going between them, heading for what looked like somebody’s living
room across the street as I bounced over the curb, the rear
end coming three feet off the ground before slamming back down.
The two Explorers I had hit went spinning, with the one that had
hit me originally crashing into them both, pieces of metal and
glass flying everywhere. A lady was looking out her front door,
only yards away, staring straight at me as I headed towards her .
I screamed again this time jerking the wheel to the right, running
into a thick row of hedges between that house and the next. That
must have done the car no good because the motor cut off, my foot
was still pushing on that pedal. The song ended and Rolfe reached
over and turned it off.
We got out of the car, guns at the ready. The three Explorers
were a tangled, smoking mess and there was no sign of movement
from within.
“Great driving,” Rolfe said.
***

Jade is the first book in an urban fantasy series with tons of action and a lot of humor. You can by a copy here: 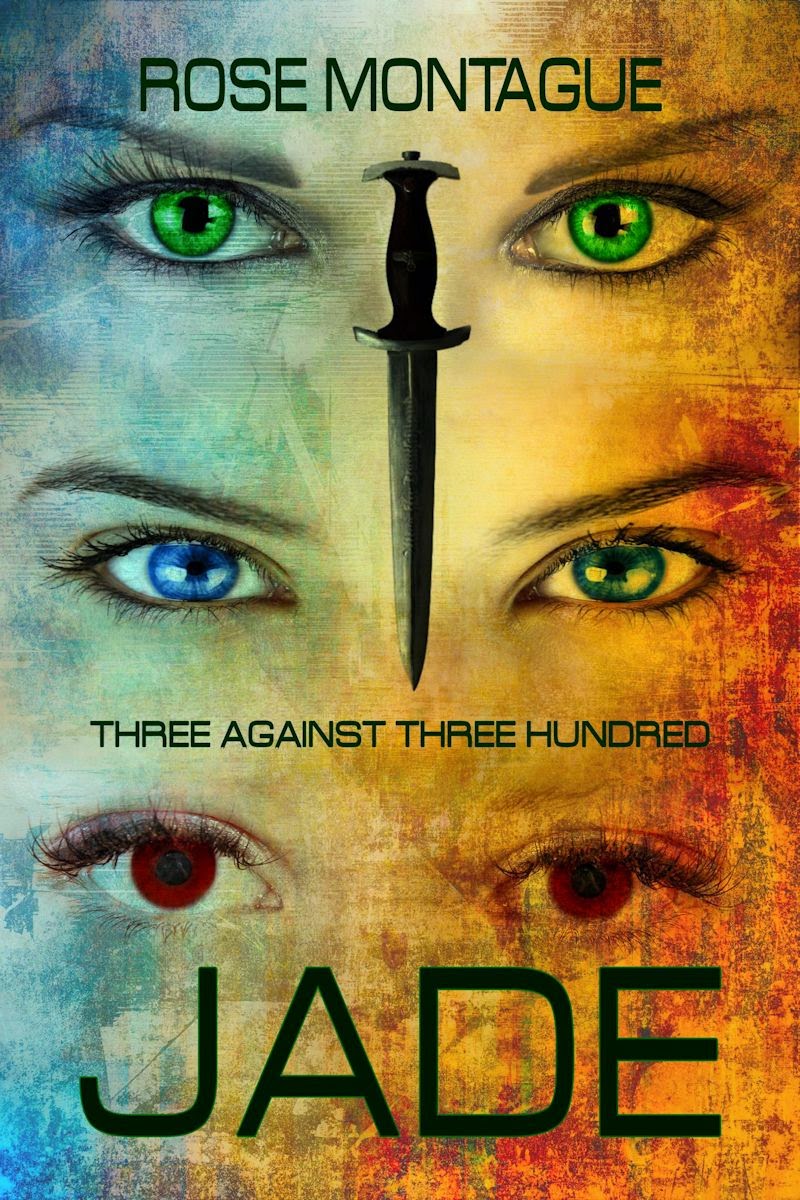