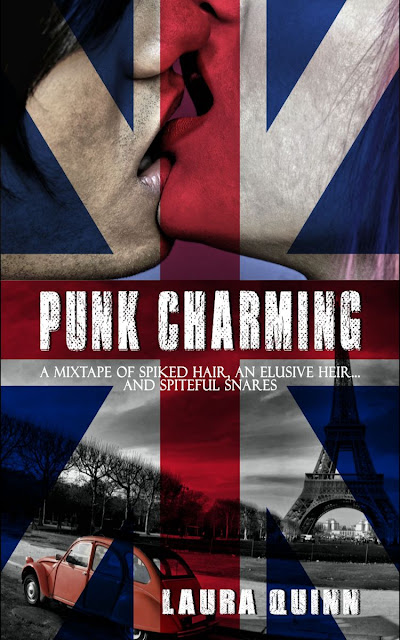 1986 – Shoulder pads are big, hair is bigger, and American college student Kate Spenser is set to embark on the biggest adventure of her life. Having been accepted to a summer study-abroad program in Oxford, England, Kate travels to Europe for the first time. The eighteen-year-old is psyched about a summer of exploring countries on her own, experiencing new cultures, and perhaps meeting a charming young man along the way. Armed with a French-English dictionary and her Walkman loaded with Duran Duran, Kate is ready to start her adventure in France. Little does she know what awaits her when she arrives, and how she must use her wits to escape peril in Paris. Fortune favors Kate when she meets her Punk Charming, and it’s love at first sight. Now, if she could only find him again! James Barrington meets his soul mate while on the run from Paris. Mis-cues and sabotage prevent him from reuniting with Kate, but he can never forget her. If only he had told her the truth before it was too late. Or is it? Can true love conquer all?

Check out the video trailer....

Excerpt 1:  Lame Pickup Lines in 1986
A single word soared above the general chatter and music, snagging James’ attention. Someone at the far end of the bar ordered a snakebite. James leaned on his barstool and strained to hear the rest of the conversation.
“You ought to try one, it isn’t as sweet as cider and not as bitter as lager,” the voice continued. “It’s just the right blend, like you and me, baby.”
James tracked the voice to a gangly young man, sitting at the edge of the tall oak stool. He wore baggy electric-blue parachute pants and a grey wool jumper with a slight tear in the left shoulder seam. His pallid skin tone was magnified under black-rimmed spectacles, which looked as if they may have belonged to his father. He was delivering lines to a curvaceous blonde in a raspberry leather mini-dress, perched atop the neighboring stool.
Undaunted by the lack of response, the pursuer slicked back a wave of dark hair from his forehead and continued, “I’m David and I bet your name is Angel, because your body is heavenly!” He intended to initiate a provocative brush of his foot against hers. Instead, his battered white trainer knocked off one of her mock-crocodile stilettos.
The young woman smiled politely, and excused herself. She slid down from her stool, returned the shoe to her manicured foot and pretended to join a group of friends in the opposite corner of the pub. Moments later, she accepted a Babysham from an older man, who was layered in enough gold chains to make Mister T jealous.
“You don’t know what you’re missing! Scientists are the business now,” he shouted futilely in her direction. “Remember, Time Magazine replaced its 1982 Man of the Year with the PC as Machine of the Year. Times are changing!” 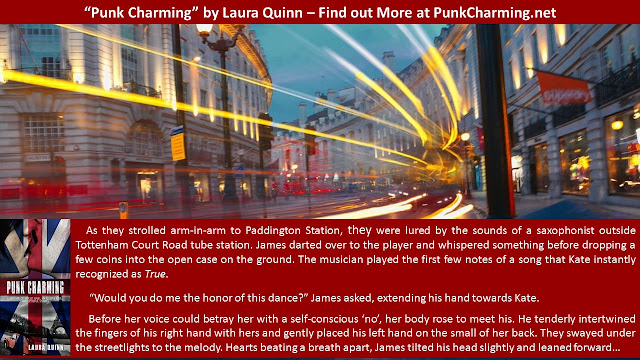 Author Bio:   Laura Quinn is passionate about writing and traveling, and is happiest when combining the two. She is well-trained, and often outsmarted, by her beloved dog and cats. A former user of pay phones, paper maps and VHS players, she now embraces technology…and is a Pinterest addict with over 26,000 pins. Laura is a forever fan of Duran Duran (30+ years and counting!), from Walkman to iPod. She holds a Master of Liberal Arts degree from the University of Chicago and teaches creative writing at local colleges.  Laura welcomes visitors to her website at LauraQuinnBooks.com or email at LauraQuinnBooks@yahoo.com. 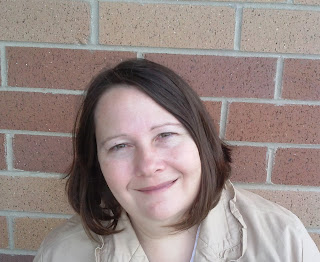 1. An 80's retro/contemporary romance? I love the concept. What inspired you to write this book?

Just like the main character, Kate, I studied at Oxford University during the summer of 1986. The spark of an idea for this book came to me then (probably while enjoying a snakebite at the Eagle and the Child Pub in Oxford). Although it took a while (a few decades!) to materialize, the story absolutely had to be set in the 80s - the days of glam fashion, big hair, pay phones, VHS players, the Walkman, and mixtapes.
2. What are you currently working on?

I'm currently working on two novels. The first is a sequel to Punk Charming and the second is a new mystery series.
3. What authors/books inspired you when you were growing up?

As the daughter of an English teacher, and an English major myself, I was fortunate to be exposed to brilliantly written books by authors spanning many eras and nationalities. I gravitate towards stories that transport me to new places, make me love (or hate) the characters, and teach me something new. Shakespeare, Orwell and Poe are some of my very favorites, and I can read their works again and again and again. My grandmother instilled a love of English mysteries in me, and passed along her cherished collection of Dickens' classics.
4. What have you learned since publishing your first book that you wish you knew just starting out?

It has been such an exciting journey! One thing I wish I knew was how much time is spent for book promotion. Had I known this, I would have pushed myself to finish writing the sequel before Punk Charming was published. The carefree days of writing are in short supply now, so I have to be better at structuring my time.
5. List three great things about your book that might convince a reader to give your book a try?

I'm going to rely on the comments I most often hear from readers to answer this one:

1. It is set in the awesome 80s! Punk Charming is chockablock with 80s pop culture, so you can have fun reliving the decade in all its neon glory, or, if you missed it, get a sense of what it was like to live in the pre-Internet age. Each chapter begins with a song title that was popular at the time, and relates to that section of the story. With songs such as: Pet Shop Boy's "Love Comes Quickly", Madonna's "Live to Tell", Arcadia's "The Flame" and Bananarama's "Venus", you may find yourself singing along. Even the Bears' Super Bowl Shuffle makes an appearance.

2. Punk Charming takes place across Europe, with scenes in Paris, Madrid, Barcelona, Vienna, London and Oxford. Many readers have asked me when this will be made into a film (all offers accepted!). The locations would be stunning on the big screen! Until then, I hope the pages will transport you to these amazing cities. Take a virtual global culinary tour with croissants, patatas bravas, Cava, Vienna coffee, trifles and a 99.

3. The story is a fun escape. Punk Charming is a love story at its heart, one that focuses on the characters and their journeys through life and love. Readers cheer for Kate, an American New Waver, and James, an English Punk...and they love to hate David, an English astrophysicist. There are some furry characters involved in the plot too, including a felonious feline, a curious kitten and a puckish puppy. You'll even pick up some great new drink recipes including the illicit snakebite and summer favorite Pimms and lemonade. 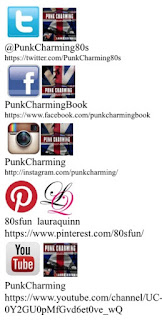 Posted by Rose Montague at 4:41 AM