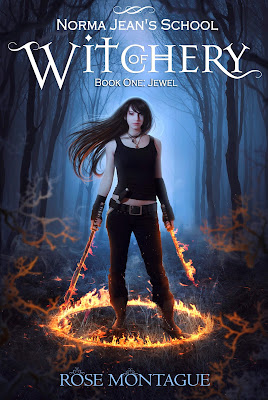 In Jane, Jewel is introduced as a teen witch who helps Jade, Jane, & Jill out of a tight spot. Jewel's parents are later killed in a car crash and Jade & Jane become her adoptive parents. What could possibly go wrong? This is an excerpt from Jane, where Jewel is first introduced....


Jill perked up as a young teenage couple approached from our target building. We could tell they were a couple as they managed to rub shoulders a few times crossing the street. Jill whispered that they were a pair of young witches. As they entered the patio area, the girl looked over at Jill curiously. We had a couple of seats available and they plopped down across from us.
“Mind if we join you?” the girl asked.
I could tell she was the leader of this couple. The young man was still looking at Jill. She was obviously Fae, pure blooded, her snow white hair coming out from beneath the baseball cap failing to completely hide her pointed ears and regal features.
“Certainly,” Jill said. “We could use some company.”
“I'm Jewel,” she replied. “This is my friend Ben. We don't see too many Fae around here. Your magic is like a bright light, it's really incredible.”
Nothing shy about this girl, I thought, looking at Jill to see how she would respond.
“Nice to meet you both,” she replied. “I'm Jill, but you probably know me as the Winter Queen. This is my friend, London Jane. You probably know her as the day-walking vamp that has been in the news lately.”
I gave Jill a quick glance as we exchanged handshakes across the table.
“Oh wow, this is too cool,” Jewel said. “Something told me to bring my yearbook with me this morning. Now I know why.”
Ben had his hand to his forehead. I could tell he was a little embarrassed. “She gets an autograph from just about anyone she thinks is anyone interesting,” he said. “This is our last year of regular school. They’re shipping us off to witch school in the fall.”
Parents or mentors train witches when they are young. When they get to High School they start their formal witch training. That would mean these kids were probably only around fifteen or sixteen years old.
“I have the perfect spot for you guys.” Jewel said, opening her yearbook up and flipping through it. I could tell each page had quite a few autographs. It was obvious this was something she was really into.
She stopped on the page labeled supe city club, and turned it around so we could sign.
“Happy to do that,” Jill said, smiling. She signed Jill with the Winter Queen written right under her name and the royal seal of the Winter Court magically appeared below that.
“Showoff,” I said. I signed as London Jane and wrote day-walking vamp under my name. I could tell Jewel was pleased.
“To think I had to drag Ben out of his apartment this morning,” she said.

Get Norma Jean's School of Witchery, Book One: Jewel

Posted by Rose Montague at 3:22 AM